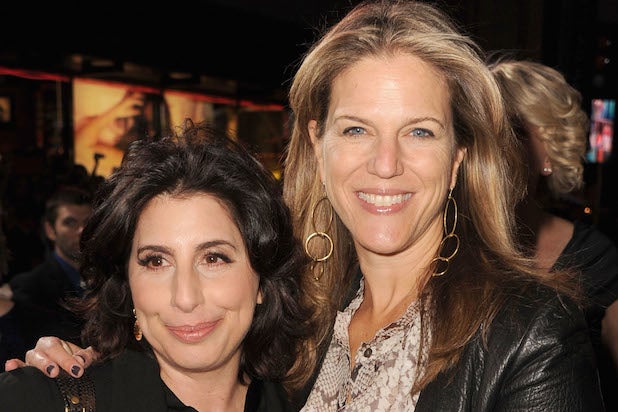 Warner Bros. production EVP Lynn Harris is leaving the company, according to an internal email sent around the studio Wednesday.

Harris (above, right, with WB exec Sue Kroll) has held the role for more than a decade and will stay on to consult on projects that are still in development, including “Godzilla,” “Blended” and “Jupiter Ascending.”

Here’s the email from Greg Silverman, president of creative development and worldwide production:

It’s always hard when a valued colleague decides to leave the Warner Bros. family, especially one as well liked and respected as Lynn Harris. And in this case, it’s particularly difficult because she is not just a colleague, but a long-standing friend to everyone in our group.

Lynn has had a spectacular run — from BENJAMIN BUTTON and the TITANS franchise to MAGIC MIKE and MAN OF STEEL — and she was instrumental in bringing GRAVITY to the screen.

Most recently, Lynn shepherded GODZILLA, BLENDED and JUPITER ASCENDING for us and I’m pleased that she has agreed to continue consulting on those projects for the studio.

We, of course, support her decision to seek new challenges, and I personally know she will be as successful in her future endeavors as she has been during her tenure here at Warner Bros.