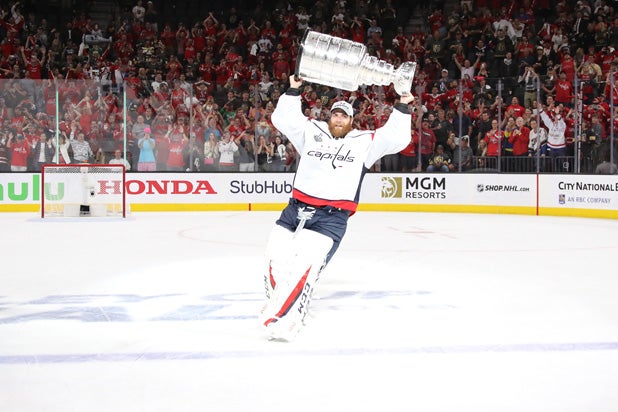 The Washington Capitals claimed their first Stanley Cup championship in stunning fashion Thursday night with a 4-3 victory over the Vegas Golden Knights in Sin City.

The win in Game 5 of the best-of-seven series ended a 44-year championship drought for any Washington, D.C. team, with the Redskins being the last to hold the honor in the 1992 Super Bowl.

Thursday’s win also marked the first Stanley Cup for Alex Ovechkin, despite being the Capitals’ star player for much of his 13 years with the team. The Russian left wing went on to be awarded the MVP title for the 2017-18 season.

Also Read: How the NHL Has Turned the Stanley Cup Finals Into a Must-Watch Entertainment Experience

Ovechkin is now the third player in NHL history to score 600 career regular-season goals before hoisting his first Stanley Cup.

“At the beginning of the year, I said we’re not going to be second. We’re going to win the Stanley Cup. That’s all that matters,” Ovechkin said.

Even as the Capitals’ friends and family stormed the ice at T-Mobile Arena in Las Vegas, the phenomenal and surprise success of expansion team Golden Knights was not overlooked.

“Thank you Las Vegas, for the best first year any team has ever had,” NHL commissioner Gary Bettman said.

Game 5 was played in Vegas, but that didn’t stop thousands of fans gathering in downtown D.C. around the Capital One Arena and the steps of the National Portrait Gallery.

Before either team took to the ice, rockers Panic! at the Disco performed a surprise performance on a floating stage by the Fountains of Bellagio in Vegas.

See tweets of congratulations to the Caps — including from the LVPD — below.

Congrats @Capitals fans on a well deserved #StanleyCup Enjoy the entertainment “capital” of the world. 44 years is a long time coming. @DCPoliceDept, we will keep them safe, thanks for keeping ours safe. #vegasborn #vegasstrong

Congrats on getting your name on the #StanleyCup, @Capitals! We hope to join you soon.

Congrats to Ovi and the Capitals. So well deserved. Ovi was a beast all playoffs and has been his whole career! What a year for the Golden Knights, such an unbelievable ride. #StanleyCup

THANK YOU fans for being a part of this incredible inaugural season.

THANK YOU Vegas for welcoming us to our home. pic.twitter.com/dwjvke7Aqq

Now this is not the end. It is not even the beginning of the end.

But it is, perhaps, the end of the beginning.

Congrats @Capitals!!! Way to make all of the @DMVFollowers proud!!!! #HometownHeroes