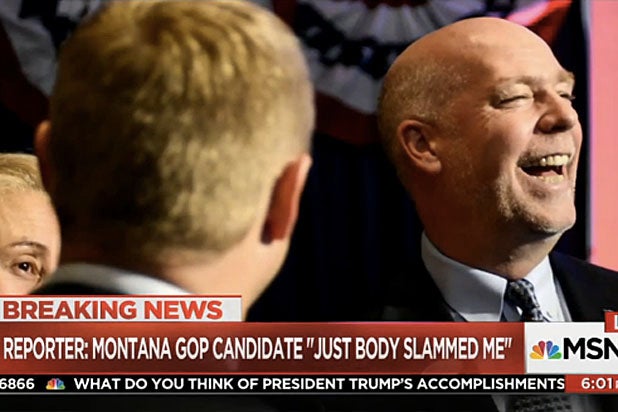 “I should not have treated that reporter that way, and for that, I’m sorry, Mr. Ben Jacobs,” Gianforte said, drawing cheers from his supporters.

According to Jacobs and two other witnesses, the reporter was attacked — “bodyslammed” as Jacobs described it — by Gianforte at the candidate’s campaign headquarters on Wednesday after asking a question about the Republicans’ healthcare plan.

An interview with Fox News was being set up at the time, and Fox News reporter Alicia Acuna later backed up Jacobs’ version of events.

“When you make a mistake, you own up to it. That’s the Montana way. Last night I made a mistake. And I took an action that I can’t take back,” Gianforte said about the attack, which took place less than 24 hours before voters went to polls. “I should not have responded in the way that I did, and for that I’m sorry.”

Watch the apology below.

"Last night I made a mistake. … I'm sorry." Gianforte apologizes for his treatment of Guardian reporter Ben Jacobs https://t.co/G9T1JOVUd0 pic.twitter.com/KuD2x0F2ST

Though Gianforte initially claimed the attack was in self defense, audio from the room in which it took place, alongside accounts by Acuna and BuzzFeed news reporter Alexis Levinson, contradicted that story, and Gianforte was later cited by local law enforcement for misdemeanor assault.

Following the incident, every major newspaper in Montana withdrew their endorsements of Gianforte and the incident was condemned on the national stage.

But the tech executive was already the heavy favorite to win in the Republican stronghold state, where early voting had been underway since May 1. Voters ultimately did not shift their support to his opponent, Democrat Rob Quist.

On Thursday, Gianforte was declared winner with 50.7 percent of the vote to Quist’s 43.4 percent, according to The New York Times.