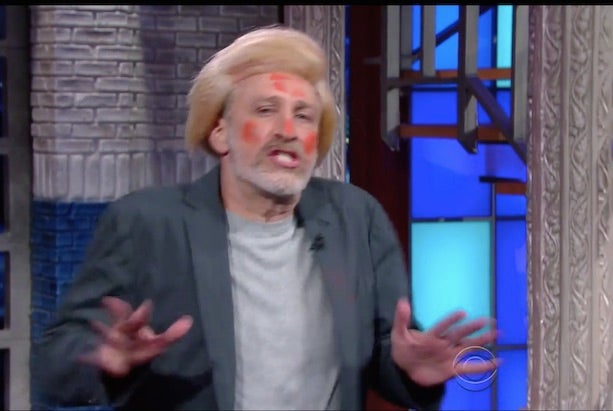 Jon Stewart crashed Stephen Colbert‘s “Late Show” on Thursday to pull off one of the greatest Donald Trump impersonations of all time as part of his fight to get a 9/11 first responders bill passed.

Colbert was performing his monologue as Stewart crashed the set to rousing audience applause.

The former “Daily Show” host initially made a serious pitch to encourage Congress to pass the Zadroga 9/11 Health and Compensation Act, but Colbert quickly cut him off, screaming, “Boring!”

He advised Stewart to Trump up his pitch, handing him a Trump wig. Stewart tried again, but Colbert still wasn’t feeling it, so he smeared Cheetos all over Stewart’s face.

Stewart then delivered an epic Donald Trump impersonation to lobby Americans to compel Congress to pass the 9/11 first responders bill.