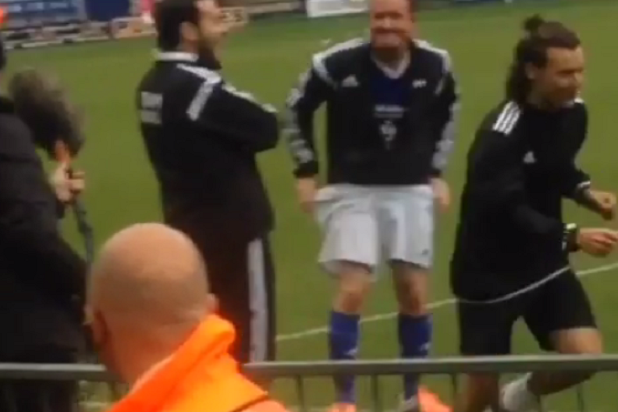 Poor Piers Morgan; he appears to have been caught with his pants down.

The former CNN host suffered humiliation at the shifty hands of One Direction singer Harry Styles over the weekend at a charity soccer match.

As depicted in the Vine video below, “What Makes You Beautiful” singer Styles rushed up behind Morgan while he was standing on the sideline and tugged his shorts down, forcing Morgan to engage in a rushed effort to preserve his modesty.

Embarrassing as the incident might have been, Morgan did seem to take it in stride — though he did vow vengeance on the 1D heartthrob.

See video: Ted Nugent Takes Credit For Piers Morgan’s Cancellation: I Got His ‘A– Thrown Out’

It’s hard to say what’s more embarrassing — getting depantsed in a crowd full of soccer fans, or being a 49-year-old man who tweets a One Direction hashtag.

Perhaps viewing the video — once again — will bring some clarity to the matter.