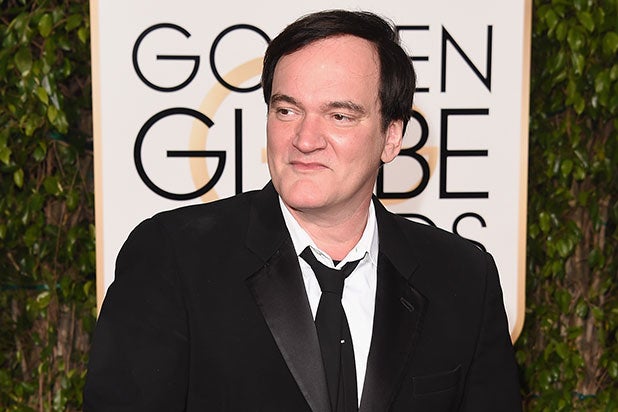 The Weinstein Company is partnering with Quentin Tarantino again — sort of.

TWC announced Friday that it has acquired the worldwide rights, excluding French-speaking territories, to the upcoming documentary “21 Years: Quentin Tarantino.”

The project is being produced and directed by Tara Wood. Harvey and Bob Weinstein began working with Tarantino nearly 25 years ago on his first film “Resevoir Dogs” and have partnered with Tarantino on all of his projects since.

This marks Wood’s second film of the series. She had previously done “21 Years: Richard Linklater” and is already in the preliminary stages of her third installation, currently selling in Cannes.

Stemming from the idea that an artist’s career can be characterized by its first 21 years, the film is a behind the scenes look at Tarantino’s body of work.

The film will feature conversations with frequent collaborator’s as well as friends and fellow filmmakers about what it’s like to work with Tarantino and be part of the often controversial process of creating such iconic films the likes of “Reservoir Dogs,” “Pulp Fiction,” and “Inglorious Basterds.”

“Working with Quentin time and time again continues to be one of the highlights in my career both at Miramax and TWC – not only because he’s one of our industry’s true visionaries and auteurs, but because he’s become a true friend to Bob and me over the past 20 years,” Harvey Weinstein said. “There’s a universal understanding when you hear the name Tarantino. Tara’s film will give audiences a glimpse into the man we have had the honor of knowing and we couldn’t think of a better home for a film documenting Quentin.”

The deal for the project was negotiated by James Allen, David Glasser, Jennifer Malloy and Michal Podell Steinberg for TWC with Tara Wood on behalf of Wood Entertainment.