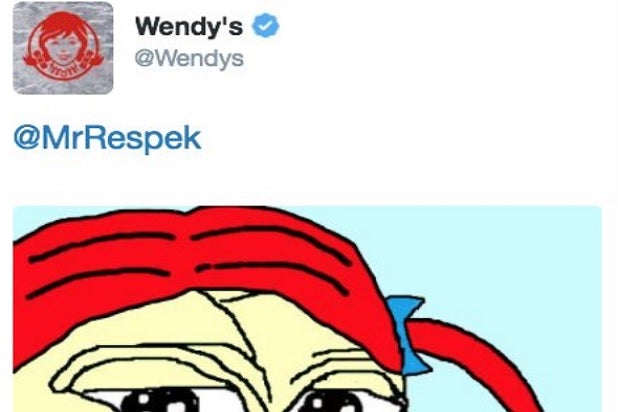 The social media team at Wendy’s is probably feeling a touch of indigestion right now.

The fast-food chain — which in recent days has gained attention for its suddenly hip Twitter account — flamed out on Wednesday, after inadvertently tweeting a hate symbol.

The company responded with a tweet of the cartoon character Pepe the Frog, adorned with the trademark red hairdo of the company’s namesake mascot.

I love that it was in response to this pic.twitter.com/rCkrqsvZL1

Unfortunately for Wendy’s, the Pepe character was adopted by the alt-right political movement last year — and subsequently branded as a hate symbol by the Anti-Defamation league.

In September, the ADL added Pepe to its online “Hate on Display” database, because it had been used to promote “anti-Jewish, bigoted and offensive ideas.”

Also Read: What Is Pepe the Frog? A Short Explainer of the Alt-Right Meme Mascot

“Once again, racists and haters have taken a popular Internet meme and twisted it for their own purposes of spreading bigotry and harassing users,” said ADL CEO Jonathan A. Greenblatt at the time. “These anti-Semites have no shame. They are abusing the image of a cartoon character, one that might at first seem appealing, to harass and spread hatred on social media.”

So, totally not kosher, Wendy’s.

A spokeswoman for Wendy’s told TheWrap that the company quickly yanked the tweet after discovering Pepe’s newfound, anti-Semitic connotations.

“A community manager was unaware of the recent connotations associated with the Pepe memes, and to avoid any miscommunication or perceived intent, we decided to remove it,” the spokesperson told TheWrap in a statement.

Maybe Wendy’s could add frog legs to its menu as a make-good. Or maybe not.