There is a play called "Tuesdays With Morrie" that follows the relationship between a young Brandeis University graduate, Mitch, and his favorite professor, Morrie Schwartz. Upon graduation, he promises Morrie that he will keep in touch, although he fails to fulfill that promise as he attempts to chase an empty life of celebrity.

Years later, Mitch rediscovers Morrie — aged and riddled with ALS. Although Morrie’s body had betrayed his passion for dancing, Mitch found that the wisdom and life lessons that Morrie could still bestow on him were a spiritual salve that helped heal the damaged life that Mitch had endured. 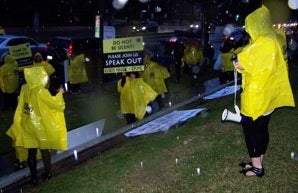 On Saturday evening, March 6, the rain soaked streets of Beverly Hills were awash with supporters who recognize the importance of the elderly, and the historic mission of the Motion Picture Home’s credo of We Take Care of Our Own. Even though we resembled some of the wet rats who not only inhabit the neglected kitchens of the Motion Picture Home as well as a few of the vermin that still collect a fat paycheck from the MPTF, we stood vigil, soaked to the bones, on the other side of the street where Jeffrey Katzenberg held his Night Before fundraiser.

Lesser souls may have stayed at home, but not us. A year before we had made our mark in the streets and had been the subject of hushed conversation at Katzenberg’s party. In a media suite, the press was assured that the residents would be taken care of ‘in the first class way that they’ve been accustomed to’.

Cut to one year later — the residents had been treated in ways that "first class" would not be an accurate description. Intimidation by hired-gun social workers, bullying by security, fake prop police cars, banishment to outside facilities where only a taxi chit is offered to the spouse left behind may be first class treatment in Abu Ghraib, but not in Woodland Hills’ Motion Picture Home.

Not in a once world-class health facility that just recently cut its highly paid CEO loose.

Certainly not in a facility where the COO’s relationship to the Camden Group, the consultants that put their approval on the closure of the nursing home, has been put under a microscope of impropriety and conflict of interest. 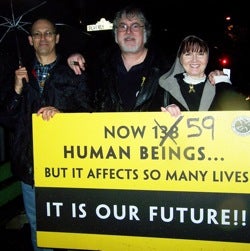 This year, while we tried to dodge not only the Towne Cars but the raindrops themselves, we found ourselves in a different position, with different friends standing by us.

Taking their place in our leaking pop-ups, huddled together as much for warmth as for being able to hear the speeches were Jamie Farr, our emcee, as well as SAG President Ken Howard, SAG First Vice President Anne Marie Johnson, Local 399 Teamster Steve Dayan who delivered an impassioned speech, Connie Stevens and George Chakiris, each in their own way urging us to continue our fight.

(At left: Protesters Brett Travis, myself and Karen McCarthy
Travis.)

Each drovehome the importance of maintaining the ‘heart of the fund’ — the nursing home.

Actors Renee Taylor and Joseph Bologna held up a check for $30,000, raised exclusively for the benefit of the residents of the nursing home. Each speaker saying that it can be done. Each in their own way offering support.

We were told that across the street, household names who had taken up our cause were also working to keep the Nursing Home afloat. A-listers who had not come out publicly had our back and were also seeking a solution.

However comforting that may feel, we must not rest on their laurels and use what momentum we have as an excuse to let others do our work for us. We cannot rest.  We brave inclement weather and worse to insure that the MPTF recognize the crucial importance of the Long Term Care unit for now and for generations to come.

We savor our victories. Although it’s true that David Tillman is now out of the picture, we can only wonder what the monetary cost of his $900,000-plus salary and the yet to be known severance package cost the fund. We can only wonder what damage Seth Ellis has wrought to the fund, and what influence he may have used in the report issued by the Camden Group.

I urge you to watch the video that details the incestuous relationships that have brought us to this point.

A simple farewell that should hold special meaning to all of us who care about the elderly and their rightful place at the Motion Picture Home. When we say our final goodbyes, let it be within the womb of an industry that created a home for those in their community that turned to them for care. When we say "I love you" to those who are about to leave us, let those words echo in the hearts of an industry whose very nature is one of charity and care.

We are not deceitful. We must expunge those who are.

If we could learn a lesson from "Tuesdays With Morrie," it’s that even though you may see a "limp husk of a body," there is a beautiful soul hidden beneath that is worth saving. The promise of "We Take Care of Our Own" will not be trumped by empty programs of Successful Aging and transparent relocation of residents to areas of the campus for which a year ago they would not have qualified for residency in order to ‘empty the hospital’.

As the rats leave the ship we will make sure that it does not capsize. We will continue, along with our friends in SAG and the Teamsters, to ensure the future of Long Term Care for the motion picture and television industry.

We will work to keep families together, and return the MPTF to a worthy cause deserving of donations.