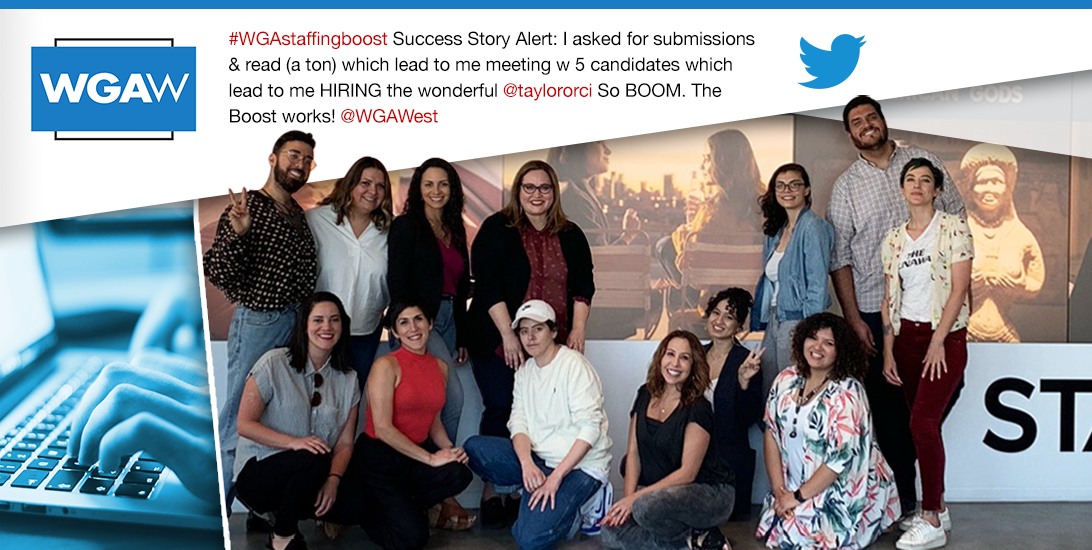 WGA Success: How #WGAStaffingBoost Could Change How Writers Do Business

”People think there’s only one way to do things…The #WGAStaffingBoost is great because is opens another avenue for a new way to do business,“ ‘Vida’ staff writer Taylor Orci tells TheWrap

When members of the Writers Guild of America began firing their agents as part of the guild’s ongoing dispute with Hollywood talent agents in April, one question lingered on the tips of many tongues in Hollywood: How will writers find work?

Twitter quickly emerged as a marketplace for writers in all stages of their careers to gain support, information, and even jobs. On April 10, three days before writers were asked to fire their agents, “Into the Badlands” and “The Walking Dead” writer LaToya Morgan started the Twitter hashtag #WGAStaffingBoost.

Scribes! If you're a writer looking to staff this season, I want to help you out. Reply with a few sentences about what kind of writer you are & why showrunners should give you a shot, and I'll give you a #WGAStaffingBoost.

New “Vida” writer Taylor Orci landed what she called a dream writing job thanks to the hashtag, after the Starz show’s creator and showrunner Tanya Saracho Tweeted in early June that she was reading writers’ material with the intent of finding someone to fill a spot in her writers room.

It took roughly six weeks from the time Saracho connected with Orci via Twitter and met her in person until she celebrated hiring Orci on Twitter.

“I asked for submissions and read (a ton) which lead me to meeting w five candidates which lead to me HIRING the wonderful @taylororci So BOOM. The Boost works!” Saracho wrote (verbatim) on Twitter earlier this month.

It’s that type of connection Morgan hoped for when she launched the #WGAStaffingBoost call-to-action in the throes of staffing uncertainty.

The dispute between the WGA and the Association of Talent Agents member agencies reached its crescendo just ahead of TV staffing season, when showrunners begin filling out the writers rooms for shows. So when writers began firing agents whose agencies didn’t agree to the guild’s new code of conduct calling on them to abandon packaging fees  the fear was that emerging writers would be hurt most.

It was important to Morgan that those writers and the often overlooked minority writers get a boost.

“Scribes! If you’re a writer looking to staff this season, I want to help you out. Reply with a few sentences about what kind of writer you are & why showrunners should give you a shot, and I’ll give you a #WGAStaffingBoost,” Morgan wrote on Twitter. “This is open to everyone. The idea is to signal boost writers for folks doing the hiring.”

The hashtag took off almost immediately. And though it’s almost impossible to say how many writers, showrunners and writer’s assistants have used the hashtag since it started, it became a trending topic on Twitter the day it launched.

Three months later, and the WGA dispute over packaging fees — which are collected when agencies bundle talent they represent for a TV show or film and sell that to a studio or network — is still holding writers in a state of uncertainty, and #WGAStaffingBoost is making real-life connections that has led to job offers.

For Orci, having Saracho reach out on Twitter to say, “Let’s meet,” was a dream come true. Orci had focused most of her time on her own projects, getting her break with a couple of digital series, “Bitchy Resting Face” and “Broken People,” which eventually led to a Netflix writers room. But landing a staff writing position on a minority-led Starz show that meant so much to her and her family wasn’t something she expected — even after throwing her name in the ring.

REAL TALK: re the #wgastaffingboost I didn’t think anyone would read me because DUH this whole shit is all hyped and bananas. That’s the voice in my head trying to protect me by thinking small, but fuck that! If you’re like me, show up, get out there! We need you! https://t.co/F04xJy4U2j

“One day, I woke up and checked Twitter and Tanya was reading people, and I just remember a big voice in my head was like, ‘Taylor, this isn’t for you, you’re not gonna get read. You do your own thing and you’re fine,'” Orci told TheWrap. “I literally submitted to one place, to one person because the show just means a lot to me and my family. I remember when the billboards went up just saying, ‘Holy s–t, that’s me.'”

The WGA dispute with Hollywood agencies and their member organization, the Association of Talent Agents, has been tough for many writers, but it has been most precarious for mid-level writers or those trying to break into the business, according to entertainment lawyer Jody Simon, a partner at Fox Rothschild.

Showrunners hire writers for their rooms and tend to hire those they know or have worked with in the past, Simon said.

That’s exactly why Morgan wanted to create a space where those writers, including those of various underrepresented groups, could get recognition they otherwise might not have.

“I’m a black queer woman, so it was very important to me,” Morgan said. “I can’t stress enough, I’m a writer’s writer. Having gone from nothing to being able to help other writers gain some recognition, that makes me extremely happy… and they’re super talented. They just needed someone to see them. It is a gold mine of talent out there of people just waiting to be found.”

Morgan, who has been sleeping a lot less since launching the hashtag that keeps her busy now 24/7, said she has received an overwhelming amount of positive feedback. People reach out to tell her they’ve scheduled meetings they otherwise wouldn’t have. She said some writers have told her about meetings they’ve had at studios like Netflix, deals they’ve signed, or even connections they’ve made with independent producers to write feature-length films.

She even recently had a studio executive reach out to ask if she knew of any writer’s assistants looking for a new job opportunity. She might, she told them, if they didn’t mind her posting it on Twitter with the hashtag #WGAStaffingBoost. They too gave in to what has become a new way of doing business.

Orci isn’t alone in finding success in #WGAStaffingBoost. Cynthia Adarkwa earned a gig writing for “Vampire Diaries” co-creator Julie Plec’s new show “Legacies.” Plec, who has been reading a lot of writers’ work and promoting them on Twitter since the dispute hit its inflection point, hired Adarkwa based on a resource writers created in conjunction with the hashtag to keep track of potential hires.

Plec tweeted on May 2: “Some #WGAStaffingBoost news. I’m thrilled to announce that @cynteeeahh (Cynthia Adarkwa) will be joining the #Legacies writing team. How did we find her, you ask? My office SCOURED THE STAFFING GRID. We read her, she met w/us and we hired her. Boom.

Thank you to @TerriKopp2it and @DavidHSteinberg for reading, reviewing and boosting!! Truly feeling supported and overwhelmed at all the twitter love. So so glad this all worked out and to all the writers hustling on twitter and beyond…

Don't fucking give up!! You're next.

Morgan said she recently received an email from TV comedy writer Thomas Reyes, who said he was staffed on a Fox animated show thanks to the attention #WGAStaffingBoost brought him.

Now that writers in Hollywood have shown that it can work, how long will it last?

With four lawsuits in play between the WGA and three of the biggest talent agencies in Hollywood — CAA, WME and UTA — the dispute over how the two sides conduct business in the future doesn’t look likely to end any time soon. Morgan says she doesn’t plan to stop doing the work she’s doing to help writers — even if the dispute miraculously ends tomorrow.

The WGA said it supports keeping the hashtag alive.

“The Guild encourages members helping members through efforts, such as the staffing boost hashtags and a variety of staffing grids, on Twitter and otherwise,” WGA West Assistant Executive Director Chuck Slocum wrote in an email to TheWrap. “We have heard a number of stories about writers hired through those efforts and through the Guild’s online tools. This happened with the efforts helping directly, but also indirectly, with them serving as sources of information that writers, themselves, acted on. We see these tools helping writers with and without agents, both now, and in the future.”

Orci said writers are living in a new world, where barriers have been stripped away. There’s a direct line to the writers, showrunners and executives with the ability to give writers a shot.

“I think every writer I know has gotten to where they are in their own way,” Orci said. “People think there’s only one way to do things, and then because there are so many people going at it that one way it creates a bottleneck. The #WGAStaffingBoost is great because is opens another avenue for a new way to do business.” 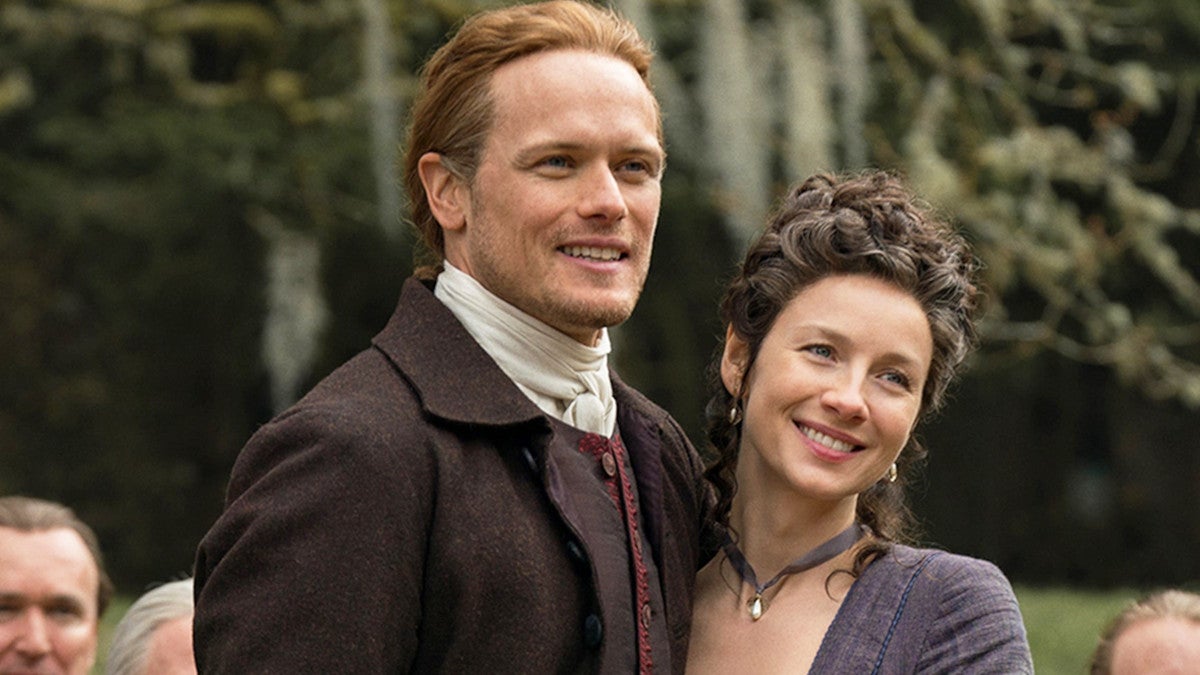 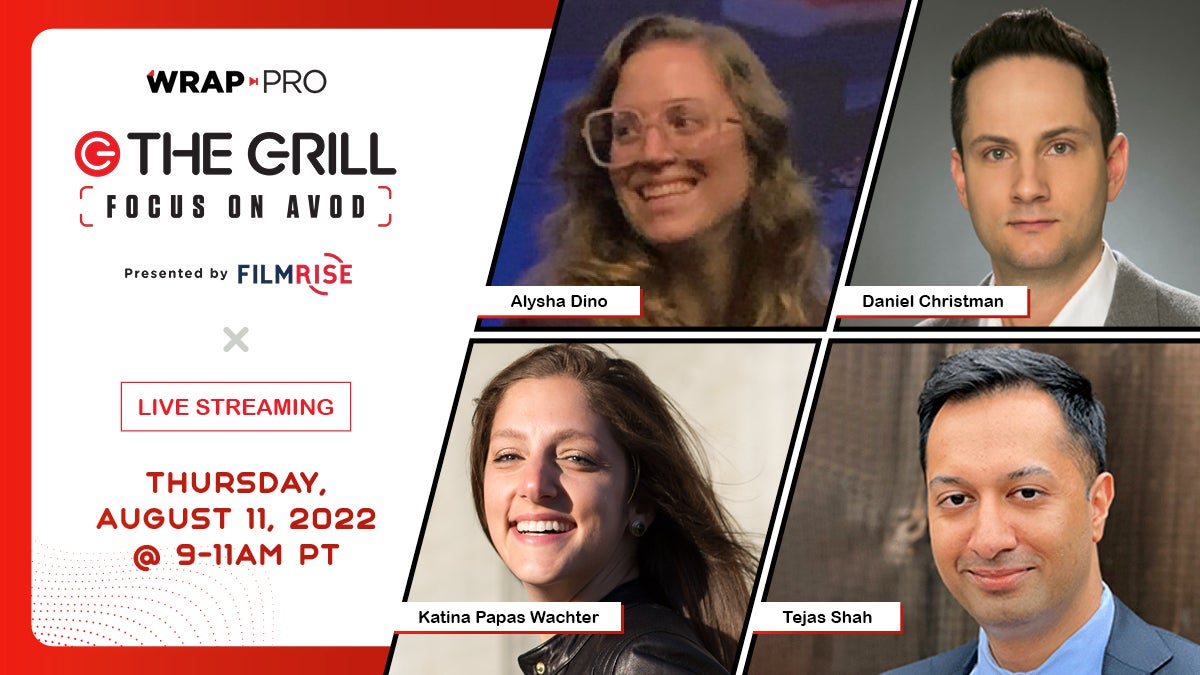