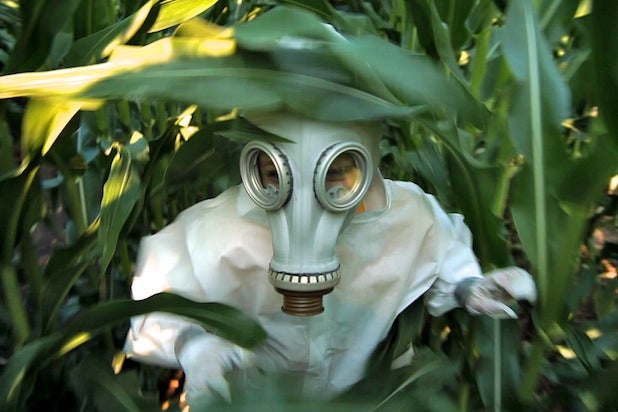 Filmmaker Jeremy Seifert’s new documentary “GMO OMG,” which opens in Los Angeles on Friday, is a layman’s look at the world of industrial agriculture — GMOs being “genetically modified organisms.” Or, as we think of them, foods.

By design, the industry is irreproachable and impenetrable, run by corporate behemoths. And to question their scientific methods or authority is to be ill-informed, unsophisticated — or stupid.

But Seifert (pictured below) is unperturbed. He moves beyond the industry’s FDA approval of genetically modified foods to tap the wall of corporate concealment. Like Peter Joseph’s “Zeitgeist: Moving Forward,” Robert Kenner‘s “Food, Inc.,” Dylan Mohan Gray’s “Fire In the Blood” and Maryam Henein’s and George Langworthy’s “Vanishing of the Bees,” he describes how corporate motives spawn systemic problems that put our health on the line. 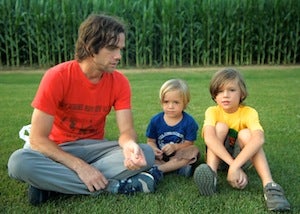 In his efforts to revitalize common sense about what is happening to the seeds of our food supply, he crafts a powerful film about our massive social contract with the biotech food producers who don’t want us to know what we’re eating.

Like any filmmaker on the circuit, he’s been traveling from coast to coast to promote it. “I’m exhausted,” he told me before a screening of the film, “but really excited and a bit nervous.”

Then there’s the issue of somehow convincing everyday people that the film — lacking biotech experts — has merit. After all, this is complex stuff that simple folks shouldn’t try to process without the appropriate filters. Indeed we’ve looked the other way. As Seifert said, “The vast majority of people don’t know about GMOs.”

And our global community of scientists doesn’t know about the side effects. Or at least they don’t agree.

“It remains to be fully seen,” Seifert said. “The pro-GM scientists, professors and industries say they are completely safe. They say genetically modified foods have been through more testing than any food in the world. But 99 percent of that testing is to make the GMOs — to create them. It’s R&D. They’re not testing them for the impact on our health or safety in the world. So the question I keep asking is: If they’re so safe then why not make us confident and release the raw data? Why not do more studies?”

Studies have been done. But it was Gilles-Eric Séralini, a researcher at Caen University in France, who led the study that burned a hole in the biotech companies’ veneer. After feeding lab rats a steady diet of GM corn over the course of two years, Séralini’s team watched tumors grow and then swell.

They looked like something out of a Ridley Scott movie. Grotesque photos and videos went viral on the net, while Séralini was blasted and discredited for shoddy science. In a less publicized move, the scientists who defended his findings signed an open letter.

“If Séralini’s study is so flawed,” Seifert pointed out, “the only way to disprove it is to repeat it.” But in the politics of food and control over knowledge, that isn’t happening.

In Russia, Peru, Switzerland, France, Germany and countries throughout the European Union, restrictions or nationwide GMO bans are in place. Their verdict: These engineered high-yield crops that can withstand a chemical downpour of glyphosate, neonicotinoids and other miticides, fungicides and pesticides are presumed dangerous and poisonous.

But is it possible, I asked him, that GMOs are a natural extension of science and technology, and that there’s something good to be said for them?

“Can there be a good GMO? Maybe. But most of the GMOs that we see are an industry answer to an industry question. Usually they don’t look at the deeper issue of the deeper question of a broken system. We haven’t even talked about colony collapse disorder or the honeybees.”

But biotech foods, we are told, have in fact earned government sanctions because of sound science. Although some of us prefer meat or coffee, while others consume more vegetables than grains, we’re evenly raised on a diet of expertise. We trust our scholars and accept that clinical trials and studies are rooted in empirical data. In other words, we believe they serve up the truth.

Seifert paused. “The science question is endless,” he said. “Science is really based on the context you’re in and the questions you’re asking. It’s total legitimate science that says it’s fine to kill insects and then there’s science that tries to control it in a holistic way. I just like that science better. I think humility and a humble approach is the better approach. But that’s not what a great corporation does. And the problem with GMOs is that they cross-pollinate.”

Indeed, the list of farmers who’ve had their crops decimated by lawsuits for patent infringement or wiped out by the farmer’s own hand is long. “Chris Hardy of Village Farm in Ashland, Ore., had to destroy his crop because Syngenta planted sugar beet seeds right next to him. And he didn’t have the funds to see if his got contaminated,” Seifert said.

I asked Seifert if he thought the movement to ban GM foods is really a movement about faith. Proponents of GMOs readily claim that those against biotech are being persuaded by junk science or simply ignoring quality scientific data in an inane quest “to keep food pure.”

So could the controversy surrounding GMOs really be about philosophy and not science at all? Should one have the right as an individual to say, “You know what, maybe it’s true that the transgenic foods you’re creating in the lab are essentially the same, but I still prefer to eat foods that haven’t been tampered with.”

“Yes, you should have that right,” he told me. “And science is not homogenous. There are so many scientists, and science is so many things. When science sets itself up to be God, that is a form of arrogance that has gotten us into so much trouble, like the scientists on the toxic-chemical side who say, ‘You don’t appreciate what I’m doing, and if I don’t do what I need to do with these chemicals, then you won’t have your plums.’

“When science is at the behest of corporations then there will be bad applications and the questions that scientists ask will be limited. You can have good scientists operating in a corporate bubble with results that aren’t good for the earth.”

And, despite vital scientific research, man’s science may not be the ultimate arbiter on what’s best for us. “If we don’t account for any non-scientific factors,” I add, “we renounce some part of our humanity and we certainly deny reality — which is that we don’t know everything and we’re still learning.”

“I love how you’re acknowledging mystery,” Seifert said. “There is something beyond us. We haven’t understood life and how the world grows and breathes and works together. Just look at a shovel full of soil. So much biodiversity, so many bacteria in such a small amount — and we’re willing to douse it with chemicals to kill it. We don’t even understand it or how it interacts with the food we grow or how it interacts with our RNA and DNA. So I think humility should be a part of this conversation — and it hasn’t been.”

Then Seifert had to run. He had another appearance to make and a flight to catch. “Last question,” I try. “What do we do? What’s the answer to GMO concerns?”

“I think we need GMO-free zones like in Marin and Mendocino counties. We don’t want to live under threat of contamination as we grow our alfalfa or corn. We should also have Roundup-free and chemical-free zones. We have the power to do that as a society and make that decision.

“I think it’s simplistic to think we can shop our way into a sustainable future by buying organic foods. We have to shape our future. We have to wake up to the Farm Bill and stand up. Voting for labeling is a great first step. The question is: Do we have a right to know that GMOs are in our food? And the answer is: Damn right. I think the average person understands we have the right to know.”

Laurene Williams talks with provocative filmmakers and performers who are out of bounds. She is the senior editor at HoneyColony.com and the writer/director of "Phil Cobb's Dinner for Four," an out-of-bounds tale on Amazon Instant Video.
x