For about the last year or so there has been a rogue monkey of the Rhesus variety making public appearances in the Tampa Bay area. He (officials believe it to be a male) has shown up in backyard trees, gardens and even in public parks.

Game officials have recently shot him with as many as two sedative darts in one load — and nothing. He just kept on a-swinging from limb to limb through the trees.

Where on earth this monkey came from was the talk of the town — until authorities remembered one key event that happened a while (oh, about 80 years ago by now is the best guess) back. 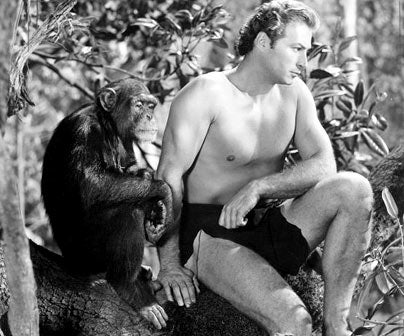 In the early days of the film industry, movies were more often shot in Florida than anywhere else — mostly in Jacksonville, but also in Silver Springs and other areas nearby. (Not understanding the economic suicide that they were committing, local residents didn't like all the ruckus, so they ran the filmmakers out of town. The rest is Hollywood history.)

When producers were shooting "Tarzan of the Apes," starring Johnny Weismuller, in the Silver Springs Park, one local businessman, a Colonel Tooey — a riverboat captain who gave tour rides along the Cypress Swamp — had a not so in-genius idea, inspired no doubt by the Tarzan hoopla.

He figured that monkeys would be interesting to the tourists and increase his business along the river.

So, Colonel Tooey imported a few hundred of these primates and set them loose on Devil's Elbow. What Tooey didn't anticipate was that the Rhesus monkey is an avid swimmer, so no sooner than he let them lose, they hit the river and floated off to a place more to their own likings. It happened to be what would later become Ocala.

Experts believe that the "Mystery Monkey of Tampa" is a descendant of one of these escaped Rhesus monkeys who still number in the hundreds and have become the United States' only indigenous monkey species ever —  neo-indigenous as they may be.

They think that perhaps this rogue character unsuccessfully put in his bid for the championship title (Leader of the Pack) and was ousted by the group. Now that he has been run off by the rest of the brood, he will never be welcomed back into the fold.

In his natural habitat — where there are several broods of the species — he would have been able to find a mate and perhaps start his own tribe. But here, with only one known troop — in which he is no longer welcomed — he is destined to roam alone for the rest of his natural life. Or until he quits outsmarting the game commission, they can catch him and find a more suitable habitat for him — maybe in a zoo or someplace where humans are not a danger to him, and he is not a menace to society at large.

Until then, it is rather amusing to catch the glimpses of the "Mystery Monkey of Tampa," as he continues to out-wit the best of the best trappers and game authorities.

BIO Heather Ann Angel
Heather Ann Angel is a freelancer in the Tampa Bay area, finishing up a journalism degree. First published in the Erie Times at age 16, Angel is the author of numerous children's stories, teen novels and film scripts. Check her out at www.associatedcontent.com/heatherannangel

Heather Ann Angel is a freelancer in the Tampa Bay area, finishing up a journalism degree. First published in the Erie Times at age 16, Angel is the author of numerous children's stories, teen novels and film scripts. Check her out at www.associatedcontent.com/heatherannangel
x