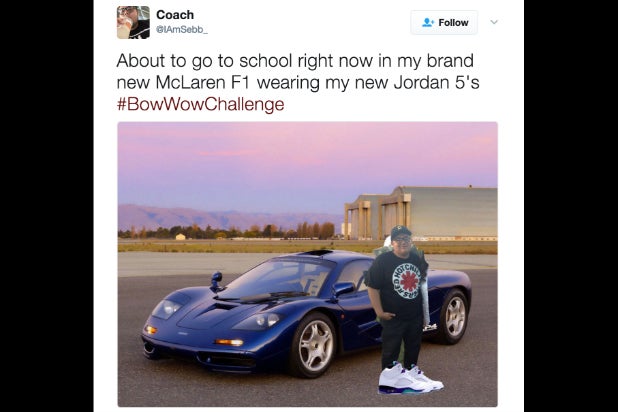 Rapper Bow Wow has been making quite the stir in the media as of recently, but surprisingly it’s not because of his music …  nor his acting — it’s over a social media challenge.

The Bow Wow Challenge calls for participants to essentially show how people — more specifically Bow Wow — lie for the purpose of showing off on social media. For example, a user will post a photo of an extravagant car like a Ferrari to their page, implying that the car belongs to them, and then in another photo the user will show that in reality, the Ferrari was actually a toy car pictured at just the right angle to make it look real.

The challenge came to be because the 30-year-old artist got caught up in a lie last week.

On May 9, Bow Wow uploaded a photo of a private jet and a few fancy cars implying that he was taking it to New York.

Also Read: Cash the 11 Best 'Cash Me Outside, How Bow Dah' Memes (Photos)

He captioned it: “Travel day. NYC press run for Growing Up Hip Hop. Lets gooo. I promise to bring yall the hottest show EVER. May 25th on We TV.”

Turns out that Bow Wow was actually on a commercial flight instead of the nice little private jet. Unfortunately for him, a passenger on his same flight snapped a picture of the rapper riding coach and posted it online for everyone to see.

Bow Wow responded by saying that the photo of him flying coach was old, but nonetheless, the internet didn’t care and began calling out Bow Wow for lying about a luxurious lifestyle which then turned into the Bow Wow Challenge.

You can see examples of the challenge in the gallery below.

Everyone lies a little bit, right? The rapper exaggerated about his mode of travel and got busted in the most spectacular way

Like most of us, Bow Wow embellished a little bit on social media ... only problem was, he got caught. The rapper (a.k.a. Shad Moss) posted a photo to his Instagram page Tuesday of a private jet and a few fancy cars implying that he was taking it to New York. A few moments later, another photo surfaced on social media, except this time it was of him on a commercial flight. And thus, we have the glory of the Bow Wow Challenge.