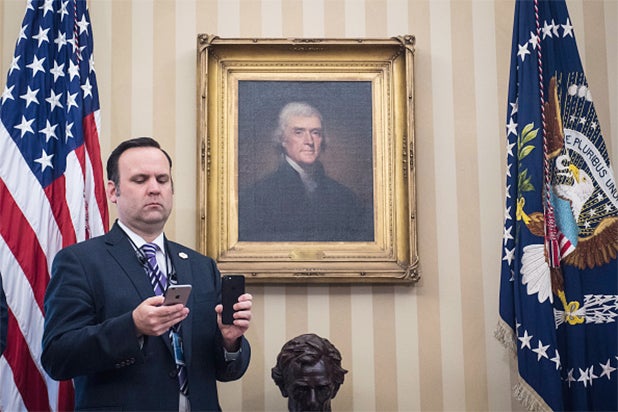 Whenever natural disasters h, there usually comes a wave of fake photos along wh – sharks swimming on the highway, for example.

Whte House Social Media Director Dan Scavino Jr. fell victim to fake news over the weekend when he tweeted out a video that he initially claimed pictured the Miami International Airport flooded by Hurricane Irma.

This video is not from Miami International Airport.

Scavino was quick to acknowledge his error: “Thank you. was among 100s of videos/pics I am receiving re: Irma from public. In trying to notify all, I shared – have deleted. Be safe!”

The airport then thanked Scavino for removing the fake tweet.

Thank you. It was among 100s of videos/pics I am receiving re: Irma from public. In trying to notify all, I shared – have deleted. Be safe!

Scavino clearly didn’t vet the first video, which others on social media claim is from an airport in Mexico City from last month during Hurricane Harvey, and now he’s getting slammed on Twitter for his oversight.

“You have a duty to ‘verify’ before sharing. Literally your job,” another chimed in. “Your improperly punctuated Tweet skips over that. Not okay.”

You have a duty to 'verify' before sharing. Literally your job. Your improperly punctuated Tweet skips over that. Not okay.

Dan, a true, honest professional would CHECK HIS SOURCES before posting anything. You're woefully inadequate in this WH role.

Wreckless irresponsibility and blatant falsehoods are this WH hallmarks.

Might I suggest @MSNBC or @CNN for, you know, ACTUAL REAL NEWS. K? Thx! xox

you didn't think to do proper due diligence before sharing a video during a disaster??