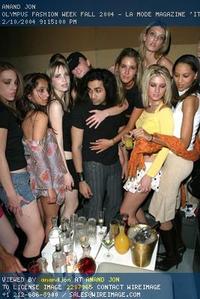 There’s a lot to be said, and a lot more that will be said, about the story I’ve been intensively working on this past week (hence my quietude in this space) and that appears in tomorrow’s Styles section. Anand Jon is a young, Indian-born designer who is facing 32 counts of rape and other types of sexual assault and misbehavior, against 12 — yes, that’s correct — aspiring models. The story asks:

"So who is Anand Jon? A rapist? Or a mark? To some he is a garden variety arriviste, an overeager cad, who crossed the line into criminal territory when his sense of entitlement overwhelmed his good sense. To others he is a struggling design talent, who played by the same elastic set of rules that govern everything else in the celebrity world and fashion industry — except he was caught. "We all know that when success comes very young at a very high level, people somehow lose a part of their compass,” said Catherine Saxton, a longtime fashion publicist in New York, whose clients have included Dennis Basso, but not Mr. Jon. “He was flying in a very high crowd and flying in that crowd for quite some time.” On the other hand, “there are a lot of young girls who want to be in fashion, who want to be in shows, who want to be photographed — who want it,” she continued. “It’s very easy to be subverted.”

Read the rest here; it sounds like a made-for-tv movie, but is no stranger for being true. That said, I guess we can expect the tv version, eventually.