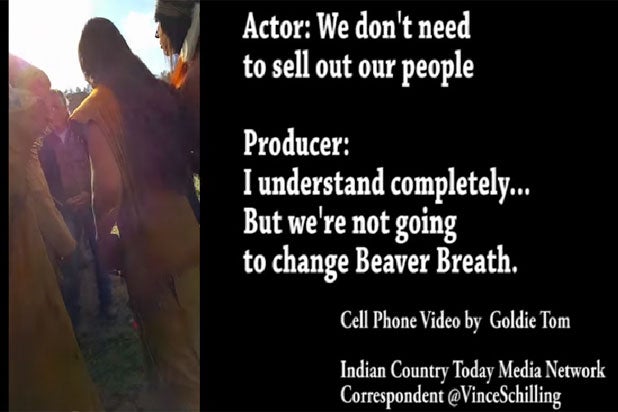 Adam Sandler learned an important lesson in humanity this week when a dozen Native American actors just picked up and walked out during the filming of “The Ridiculous Six.” The often-funny actor was forced to confront the fact that sometimes scripted satire can be downright insulting and not so funny after all.

Forget, for a moment, that they were Native American actors, and concentrate on the fact that a dozen paid actors did so. I don’t recall ever hearing about such a thespian exodus. In the past, many “minority” actors were grateful to have the work and had no choice but to bite their tongues when confronted with distasteful lines and characterizations.

But times are a changing. The public is not privy to the script, but it must have been in exceedingly poor taste for these actors to take such a bold and courageous step. It certainly put Netflix, the company that is slated to distribute the film, on the defense. The ground-breaking company issued this statement, “The movie has ridiculous in the title for a reason: because it is ridiculous. It is a broad satire of Western movies and the stereotypes they popularized, featuring a diverse cast that is not only part of — but in on — the joke.”

So “The Ridiculous Six” is a comedy whose goal is apparently to re-emphasize, to an even grosser degree, stereotypes popularized in Westerns that many found offensive to begin with. But the catchall cop-out is that it’s a comedy, and it seems anything goes as long as it’s for a laugh. There is certainly a fine line between funny and offensive, so let’s examine exactly what the terms in question mean (all definitions found in the Merriam-Webster dictionary):

Satire: a way of using humor to show that someone or something is foolish, weak, bad, etc.; humor that shows the weaknesses or bad qualities of a person, government, society, etc.

There is no doubt that satire has a place in the world of comedy. We all have weaknesses. We may act foolishly on occasion, and most people have a quality or two that he or she might like to change.

Parody: a piece of writing, music, etc., that imitates the style of someone or something else in an amusing way; a bad or unfair example of something

Parody is a comedy staple as well. The imitation of someone or something’s style can be amusing. It can even help us relate to one another in some cases.

However, the imitation of a culture, or rather hundreds of distinct Native communities, is “a bad and unfair example,” and easily leads to:

Caricature: exaggeration by means of often ludicrous distortion of parts or characteristics; a representation especially in literature or art that has the qualities of caricature

In this case, the dozen actors that decided the day’s pay wasn’t worth it and walked off set were all Native American. “The Ridiculous Six” includes Native characters with names such as Beaver Breath, No Bra and Sits-on-Face. While this is certainly an example of humor at its basest level, one might argue that appreciating this sort of thing as comedy is subjective. To depict a Native elder squatting and urinating on the ground while smoking a Peace Pipe, however, is not.

The “Peace Pipe,” as it’s become known in popular culture because of its use in historical negotiations, is far more. It is an instrument used in both personal prayer and some of Native Americans’ most significant communal ceremonies. To Indians it is sacred. So to have an Elder woman depicted squatting and urinating while smoking a “peace pipe” is beyond problematic. It is tantamount to having a respected woman urinating on the ground while reciting a prayer or chant from the Bible, Torah or Koran. Imagine whatever object or text you find sacred being depicted in this manner. No matter your affiliation, whether it is religious, spiritual or otherwise, it is not acceptable.

Being Jewish myself, I can only imagine the reaction if such a comedy script had a parallel scene about the Old Testament. The ADL and rabbis would be justifiably up in arms.

I believe there is a reinvigorated political resolve among Native people all over America in the past year. This pride is partly manifested in the organized movement, mostly in Native American communities, launched to change the insensitive names of the Washington, D.C., football team and other college and high school teams.

And just like Dan Snyder, the owner of the Washington football team, does not comprehend the insulting name, the producers of “The Ridiculous Six” just don’t get it. The actors were told that if they were “overly sensitive,” it was probably best they simply leave. To instruct any group of people as to the appropriate level of sensitivity about their culture and ultimately, themselves, is laughable, but not funny. The fact that these actors expressed their concerns about the film and were essentially told to “get over it or get gone” only compounds the problem and makes the whole incident uglier.

So the question becomes, what is a laugh really worth? Humor is therapeutic, especially so to Indian people. As with many cultures that have endured subjugation, it becomes a method of coping. As the descendant of a Holocaust survivor, I know that to be so true.

But when a group of actors playing their own people decides it’s not worth it, you have to wonder where exactly the line between funny and offensive lands and just how cheap we are willing to let a laugh get.

Filmmaker and writer Aviva Kempner has produced a new DVD of “The Life and Times of Hank Greenberg” with over two hours of extras, including a phone interview with Ted Williams. She is finishing a film on Julius Rosenwald.