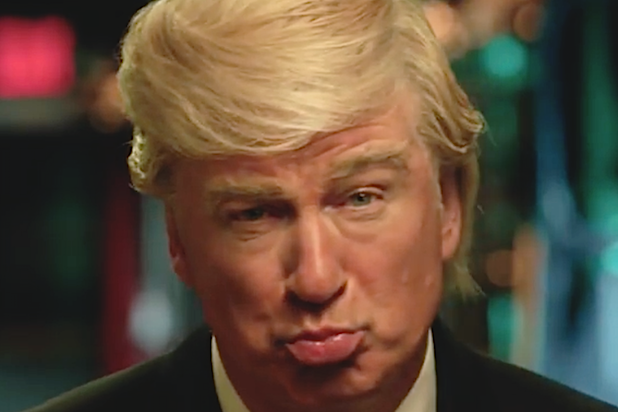 Trump called Baldwin’s now famous impersonation of him “sad” on Saturday night, saying on Twitter that the actor’s bit on NBC’s “Saturday Night Live” “just can’t get any worse.”

To that, Baldwin responded:

But the actor also retweeted a link to an August article from The Atlantic that compared Trump to Italian dictator Benito Mussolini, highlighting a quote from the piece:

“Mussolini’s rise to power also exemplifies another authoritarian trait America has seen during this campaign: The charismatic leader who tests the limits of what the public, press, and political class will tolerate. This exploration begins early and is accomplished through controversial actions and threatening or humiliating remarks toward groups or individuals. It’s designed to gauge the collective appetite and permission for verbal and physical violence and the use of extralegal methods in policing and other realms.”

Baldwin is not alone in raising alarm bells over Trump’s ostentatious statements, many of which he tweets for his 16.6 million followers to see.

An article published by Salon on Sunday said that the president-elect’s public scorn of satire like that employed by Baldwin is part of a strategy to control the media. “Democracy depends on a free and independent press, which is why all tyrants try to squelch it,” wrote Robert Reich, one of the country’s leading experts on work and the economy, and a professor at the University of California at Berkeley. “They use seven techniques that, worryingly, President-elect Donald Trump already employs,” he said, outlining them as:

1. Berate the media 2. Blacklist critical media 3. Turn the public against the media 4. Condemn satirical or critical comments 5. Threaten the media directly 6. Limit media access 7. Bypass the media and communicate with the public directly.

Indeed, it’s not enough to bemoan or even sharply criticize Trump’s freewheeling tweets if you want to effectively oppose him, argued Luigi Zingales in a recent New York Times piece that compared Trump to another controversial Italian figure: Silvio Berlusconi. “Mr. Berlusconi was able to govern Italy for as long as he did mostly thanks to the incompetence of his opposition,” wrote Zingales. “It was so rabidly obsessed with his personality that any substantive political debate disappeared; it focused only on personal attacks, the effect of which was to increase Mr. Berlusconi’s popularity.”

Piggybacking on that thought, New York Magazine consulted with protest experts for a tutorial on how to strategically voice opposition to a Trump-led administration: “1. Trump can be useful as a galvanizing force, but keep things focused on whatever your particular issue is,” wrote Jesse Singal. “2. Make everyone who is interested in your cause, or who exhibits curiosity about it, feel welcome. … 3. Stay nonviolent.”

So before going on a knee-jerk, Trump-style Twitter tirade against the president-elect the next time he riles you up — like this woman just did — think about the fact that it may very well be the response that Trump wants to elicit.