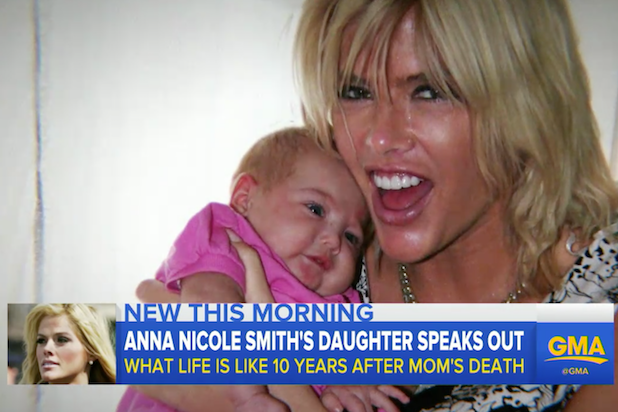 ABC News correspondent Deborah Roberts said that Anna Nicole Smith’s daughter, who is now 10 years old, won’t follow in her mother’s footsteps of living life in the public eye, as long as her father, Larry Birkhead, has anything to do with it.

“[Birkhead] said he gets offers all the time for things like a reality show, or maybe a bit part in a movie or maybe some kind of a modeling gig. She’s quite a striking little girl. You can definitely see her mother’s resemblance,” Roberts told TheWrap. “He said that’s not something he’s interested in right now. In fact, he even shields her from social media. He’s very careful.”

Ten years after Smith’s sudden death, Birkhead — her ex-boyfriend — sat down with Roberts at his home in Louisville, Kentucky to discuss raising their daughter, Dannielynn Birkhead, for a “20/20” special remembering one of the world’s first reality TV stars.

Also Read: ABC Renews 'Grey's,' 'Scandal,' 'How to Get Away With Murder' for Another Season

“He took her away to Kentucky to raise her and get her out of the glare,” Roberts said. “Interestingly, unlike her mother, who loved the camera and relished attention, Dannielynn is actually quite shy. It took a lot of doing to get her to finally open up a little bit and talk. She certainly didn’t talk much about the mother she never met but she talked about her pet lizard and her father.”

Roberts said Birkhead has “struggled” to provide a normal life for Dannielynn and that he appears to be a “very devoted and terrific father.” Dannielynn, who was only five months old when her mother died, is the “classic, typical, 10-year-old, well-adjusted fifth grader,” according to Roberts.

In the early 1990s, Smith stepped into the spotlight as a Playboy Playmate of the Year, the face of Guess Jeans and marrying billionaire J. Howard Marshall in 1994, who was 63 years her senior. When Marshall passed away in 1995, Smith and Marshall’s children argued over his fortune in court for years, and Smith never received any of the money.

Birkhead told Roberts that his daughter isn’t an heiress and does not have millions of dollars, despite what people might think about her famous mother’s estate.

“They have a nice house and they’re living well, but he works,” Roberts said. “[Birkhead] is a photographer. He dabbles in real estate a little. This is a man who is not driving a Mercedes.”

In 2002, her reality show, “The Anna Nicole Show,” launched and aired for two years. Her son Daniel Smith died from an accidental overdose in September 2006, days after Dannielynn was born and, five months later, Smith passed away.

“We were sort of curious, this was a woman who, in life, just commanded so much attention. She had that rags-to-riches, stripper-to-movie actress life. It was almost beyond reality,” Roberts said. “We though it might be worth revisiting this larger-than-life figure and what became of her little daughter.”