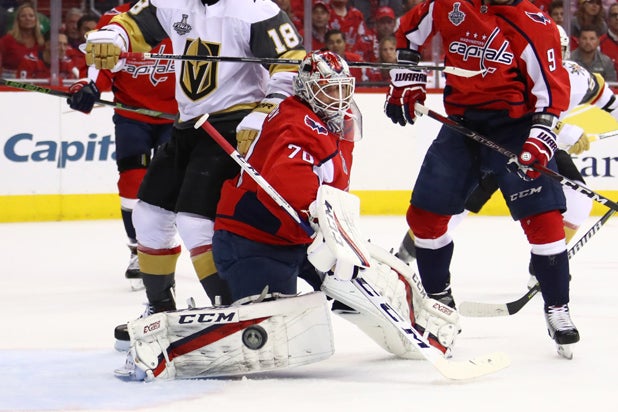 The Washington Capitals goalie, the No. 9 MLB draft pick and an FBI agent had viewers talking passionately on social media over the past seven days.

The Wrap has partnered with Canvs, the emotion measurement AI company, for a weekly look at some of the characters and personalities that have TV viewers the most worked up on social media. The data below covers May 30 through June 5 and is drawn from the most emotionally reacted-to television programs, including broadcast, cable, streaming and PPV.

During Game 2 of the NHL Stanley Cup Final, which was broadcast on NBC Sports and generated 39,906 Emotional Reactions (ERs), Washington Capitals goalie Braden Holtby made a miraculous save that spurred an avalanche of conversation. With mere minutes remaining and Washington up 3-2, Holtby blocked an attempt by Vegas forward Alex Tuch, securing his team’s victory and tying the series up 1-1. Viewers went wild, and even retired Caps goalie Olie Kolzig chimed in with praise.

SAVE. OF. THE. YEAR! #ALLCAPS #StanleyCup pic.twitter.com/OCBBQoEPMI

What a save by Holtby! #Respect

Greatest save I've ever seen!

Emotionally-charged conversation heated up during the 2018 MLB Draft (broadcast on the MLB Network, prompting 21,017 ERs) when the Oakland Athletics selected Kyler Murray as the No. 9 pick. Murray is currently the quarterback of the Oklahoma Sooners college football team, and some viewers wondered what this means for his career and which team/sport he’ll choose. (It’s worth noting that Murray said he plans to play football during the upcoming season.)

Kyler Murray! That’s pretty dope. He has to play baseball.

The series finale of FX’s hit show “The Americans” sparked 11,776 ERs, with Stan Beeman (portrayed by Noah Emmerich) driving the most conversation out of any character. In an intense scene, Stan (spoiler alert!) confronts Philip (Matthew Rhys) and Elizabeth (Keri Russell) about being Russian spies. He even goes as far as to draw his gun, leaving rapt viewers on the edge of their seat (would he arrest them?! shoot them?!) before letting the couple go. There was an outpouring of emotion from fans, and a notable undertone of thanks.

Excellent work, Stan. Didn’t know you had that in you #TheAmericans

#TheAmericans The scene between Stan and the Jennings. perfection