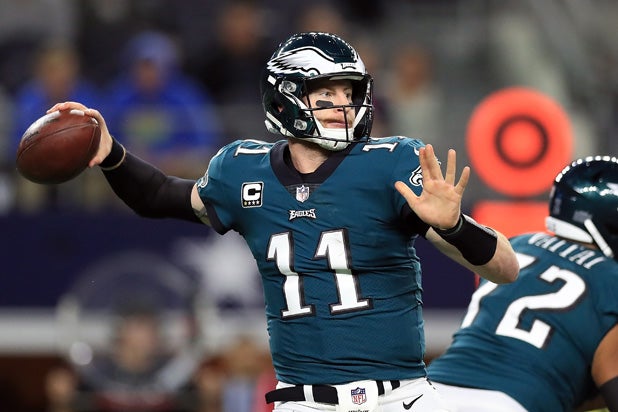 See who were this week’s most emotionally reacted-to TV personalities and characters.

A South Korean boy band, the Philadelphia Eagles quarterback and a “Voice” singer had viewers talking passionately on social media over the past seven days.

The Wrap has partnered with Canvs, the emotion measurement company, for a weekly look at some of the characters and personalities that have TV viewers the most worked up on social media. The data below covers Nov.15-21 and is drawn from the most emotionally reacted-to television programs, including broadcast, cable, streaming and PPV.

The seven-member BTS (also known as Bangtan Boys or Beyond The Scene) was the most-mentioned act during the 2017 American Music Awards, which aired on ABC and garnered a whopping 580,262 Emotional Reactions (ERs). While the overwhelming majority of comments about the group were supportive (and many were straight-up declarations of love), some viewers were, let’s just say … confused.

BTS IS ON MY TV OMG #AMAs

What the heck is a BTS #AMAs

The Philadelphia Eagles vs. Dallas Cowboys game broadcast on NBC was the sports programming with the most ERs (91,301) during the period measured, and Eagles quarterback Carson Wentz was the most-mentioned player. The Eagles continued their winning streak and triumphed over the Cowboys, with help from Wentz, who threw two touchdowns and three 2-point conversions. Fans applauded his abilities and professed their love — although, as always, there were some haters in the crowd.

This week’s episode of NBC’s “The Voice” (27,969 ERs) came down to a standoff between two Iowans: Jon Mero and Adam Cunningham. Both were given a chance to perform one song before viewers would “tweet to save” one of them. Mero performed “I Want You Back” by Jackson 5 while Cunningham did a rendition of Creedence Clearwater Revival’s “Fortunate Son.” As the music faded and fans hit social media to vote, Cunningham emerged victorious in the head-to-head battle — but overall Mero captured more of the emotional conversation during the entire evening. In the end, a lot of viewers were definitely bummed to see Mero get sent home.

.@adamlevine #VoiceResults I am shocked as no way Jon should be gone!