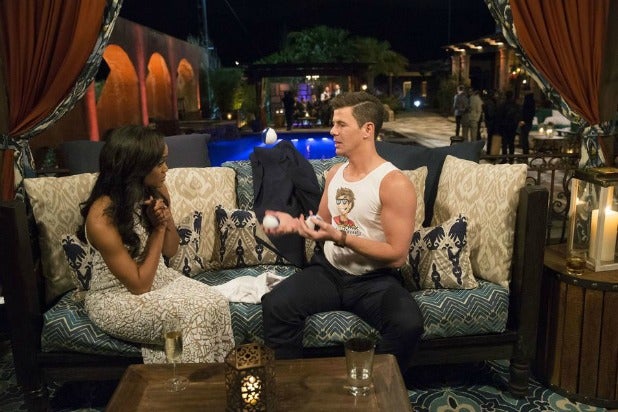 Rachel and Lucas on "The Bachelorette"

A South Korean boy band, a Cleveland Cavalier player and a hopeful “Bachelorette” contestant had viewers talking passionately on social media over the past week.

The Wrap has partnered with Canvs, the emotion analytics company, for a weekly look at some of the characters and personalities that have TV viewers the most worked up on social media. The data below covers May 17-23 and is drawn from the most emotionally reacted-to television shows, including broadcast, cable, streaming and PPV.

The 2017 Billboard Music Awards on ABC Sunday night led the way in Emotional Reactions (ERs) in the last week, garnering 910,051 ERs. South Korean boy band BTS (also known as Bangtan Boys) was a huge conversation topic, even beating out Drake in terms of mentions, although the latter took home 13 awards including Top Artist, while BTS only scored one (Top Social Artist, voted by fans). Viewers went nuts proclaiming love for the k-pop group and congratulating them on their win.

YES BTS I LOVE YOU #BTSBBMAs

During Game 4 of the Boston Celtics vs. Cleveland Cavaliers NBA Eastern Conference Finals Wednesday on TNT (132,365 ERs), with superstar LeBron James in foul trouble, Cavs point guard Kyrie Irving took the lead and ended up breaking a personal record with 42 points scored, which helped his team snag the win. Fans tweeted their surprise — and mad respect — for the athlete.

Season 13 of ABC’s “The Bachelorette” premiered on Monday (48,930 ERs), featuring attorney Rachel Lindsay and 31 hopeful contestants. The most mentioned was Lucas Yancey, otherwise known as the “Whaboom” guy, a nickname that had viewers both confused and annoyed from the start. (As it turns out, Yancey is actually a real estate investor who dabbles in comedy.) People were also less than enthused about his over-the-top antics.

Wtf is a whaboom? #TheBachelorette