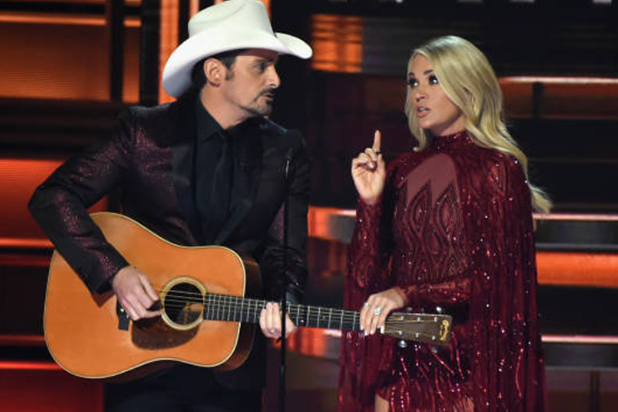 The week’s most emotionally reacted-to TV personalities and characters included a country music singer, an NBA star and a pet tiger. Yes, seriously.

TheWrap has partnered with Canvs, the emotion measurement company, for a weekly look at some of the characters and personalities that have TV viewers the most worked up on social media. The data below covers Nov. 8-14 and is drawn from the most emotionally reacted-to television programs, including broadcast, cable, streaming and PPV.

People rushed to social media to praise the star’s looks and talent, with many simply stating that Carrie is perfection. Her tribute to the victims of the Las Vegas shooting was a particularly emotional moment for many people.

carrie underwood does no wrong ever

Carrie Underwood, that was amazing

Carrie Underwood has me crying ????❤️

LeBron James was the most-mentioned player during the Cleveland Cavaliers vs. New York Knicks game (62,446 ERs), which was broadcast on local Fox Sports networks and the MSG Network.

In the first quarter, James got into a heated altercation with Knicks center Enes Kanter, which resulted in both players receiving technical fouls. The game continued to be full of mishaps, with the teams trading the lead until the Cavs ultimately took the win, with help from James’ 23 points and 12 assists. As per usual, viewer discussion was mixed, with some people applauding his skills and others hating on him.

That Lebron moment was crazy.

LeBron is just the absolute worst

AMC’s “The Walking Dead” (33,520 ERs) struck a chord Sunday night when Shiva, the beloved tiger belonging to Ezekiel, ruler of the Kingdom was killed by walkers. While deaths of fan-favorites often prompt large discussions, for some reason this one was particularly devastating to viewers (Shiva was the most-mentioned character of the night) — perhaps because while people die left and right throughout the show, an animal’s demise shows a different side to the horror brought upon this world by the zombie apocalypse.

Also Read: Watch a Tiger Get Eaten by Zombies on 'The Walking Dead' (Video)

My heart hurts. No Shiva no. #TWD