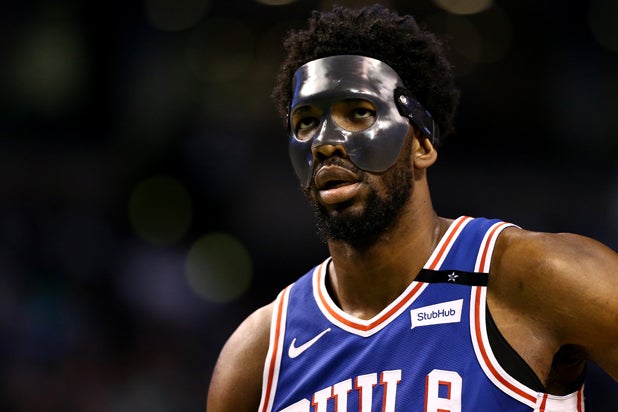 A 76er, Lucy and Wyatt from “Timeless” and an injured doctor had viewers talking passionately on social media over the past seven days.

The Wrap has partnered with Canvs, the emotion measurement company, for a weekly look at some of the characters and personalities that have TV viewers the most worked up on social media. The data below covers May 9-15 and is drawn from the most emotionally reacted-to television programs, including broadcast, cable, streaming and PPV.

Many viewers weren’t too pleased with Joel Embiid’s performance during the May 9 game between the Philadelphia 76ers and Boston Celtics, which was broadcast on TNT and received 72,695 Emotional Reactions (ERs). While Embiid, who plays center for the 76ers, drove the most conversation of any player that evening, many fans expressed outrage at his game, going as far as to call him lazy or a bum.

Embiid is softer than Charmin

The two-part season finale of “Timeless” on NBC ignited 62,888 ERs, with characters Lucy Preston (portrayed by Abigail Spencer) and Wyatt Logan (Matt Lanter) driving the most discussion. The conversation was really all over the place, but it seemed to skew slightly more negative for Wyatt while Lucy generated a little bit more positive conversation, including an avalanche of sympathy when it was revealed that Jessica (Tonya Glanz) is pregnant with Wyatt’s child.

UGH Lucy is so SAD someone please HUG HER! But not you, Wyatt. You're causing all this pain. You know what. I'll do it, myself, if I have to.. #Timeless #RenewTimeless @abigailspencer

During the most recent episode of ABC’s “Grey’s Anatomy” (33,631 ERs), April Kepner (played by Sarah Drew) generated the most viewer emotion, thanks to a storyline in which she had a close call with death. Fans live-tweeted their shock as the story unfolded (the car crash, April’s rescue and her ultimate revival), which reads as a blow-by-blow of surprise and horror, followed by complete relief.