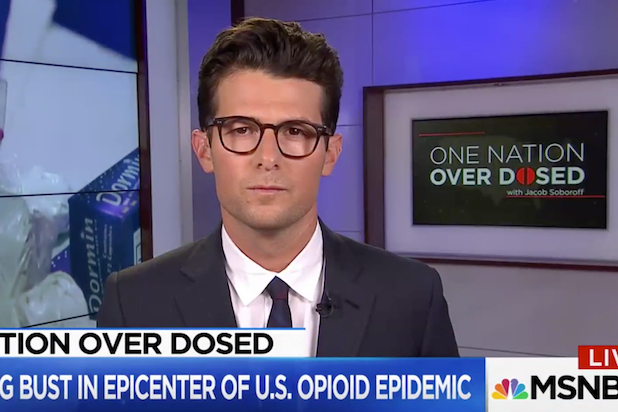 MSNBC’s Jacob Soboroff has a new three-part series on the opioid crisis in America — one he calls the most important story he’s ever told.

“When you look at the statistics and see that more people are dying from overdoses now than HIV, gun deaths and car crashes at their peak years, it’s just startling,” Soboroff told TheWrap. “To know that policy can effect change and literally save tens of thousands of lives, you know there is a sense of urgency that we’re trying to bring to the reporting.”

Soboroff’s reporting for “One Nation, Over Dosed” took him to Montgomery County, Ohio, an area local officials call the epicenter of the Fentanyl crisis and so many people are overdosing that the coroner calls it a “mass casualty event.”

Soboroff says he’s wanted to examine the opioid crisis since he joined MSNBC in August of 2015 but was busy covering the presidential campaign. He was finally given the green light from NBC News senior vice president Janelle Rodriguez and hit the streets of Ohio a few weeks ago to show viewers what is occurring on the ground of the county with the most overdose deaths in America per capita.

Opioid overdose is now the leading cause of death for people under 50 years old and Soboroff felt Montgomery was the place to tell the tragic story. He was given incredible access and credits local officials who want their story to be told.

“They’re worried about losing Federal funding for treatment under President Trump’s healthcare bill,” Soboroff said. “Everybody from the Sheriff, who let us in the jail, to the country coroner… everybody wanted us to show in great detail what they have to go through.”

Soboroff said even the local addicts and people in recovery that he came across want the story to be told, “Because the situation is so bad,” and they’re nervous nothing will be done to change it.

The series has been aired across MSNBC’s partners, including NBC’s Today” show and “Nightly News.” Soboroff is happy that the coverage is sparking conversations about the crisis and feels it’s “a shame” that the opioid crisis doesn’t receive more attention.

“Every day is life or death to the people on the streets,” he said. “I don’t think I’ve done a story that is so relatable to so many people… In Ohio, everybody knows somebody that has been touched by this in some way.”

In Monday’s first part of the series to air, Soboroff joined first responders at what residents call “Morgue Avenue,” a neighborhood devastated by overdose deaths. He also spoke with the Montgomery County Coroner inside his morgue’s “body cooler,” where 70 percent of bodies are there due to overdoses.

Also Read: Spicer on His Possible Role Change: 'We're Always Looking for Ways to Do a Better Job'

“I’ll never forget being in there and hearing that 60 to 70 percent of people who come through his morgue are now overdose deaths,” Soboroff said. “The last couple of days have been just exhausting to revisit on tape all the stuff that we saw.”

Soboroff was embedded with a law enforcement task force dedicated to stopping the trafficking of narcotics in part two of the series, which launched on Tuesday. He witnessed the takedown of a street-level dealer, which led to a mid-level dealer and ultimately the seizure of a pound of fentanyl.

“We’re telling people about a phenomenon that is happening in real time. Often times the news is looking back,” he said. Soboroff credits the Peabody Award winning series, “The OxyContin Express” and the duPont-winning documentary “Death By Fentanyl,” both by his friends,  journalists Mariana van Zeller and Darren Foster, for leading the way with their groundbreaking reporting.

“I can’t take credit for spotlighting this first,” he said. “We’re just doing out part.”

Part 2 of #OneNationOverDosed: we ride w @mcohiosheriff as they try to keep fentanyl off streets in USA OD capital. https://t.co/7ivPzWyLzz

The third and final segment of “One Nation, Over Dosed” airs on Wednesday at 10 a.m. on MSNBC.