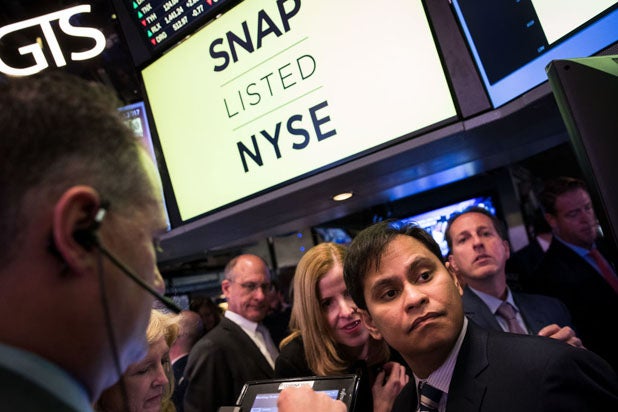 Snap Inc. — the parent company of Snapchat, the disappearing-messaging app popular among teenagers and young adults — has had a rough few months since going public in March. The company’s share price has crashed from a high of more than $27 per share a day after its IPO, to barely north of $17.30 at the closing bell on Wednesday.

At the same time, the tech industry has widely seen big gains in 2017; Nasdaq, the exchange-of-choice for most high-profile tech companies, has had an aggregate increase of 14 percent since the beginning of the year.

Snap went public in March at $17 a share on the New York Stock Exchange, but its struggles have nothing to do with where it’s traded. As the stock hovers barely above its IPO price, potential investors are watching from the sidelines, waiting to see what CEO Evan Spiegel might do.

“The sexiness of Snapchat has been gutted,” Eric Schiffer, a tech investor and CEO of the Los Angeles-based private-equity firm The Patriarch Organization, told TheWrap.  “I don’t see them with the killer competitive advantage that they had in the early stages.”

Schiffer is referring to Instagram, of course, the Facebook-owned picture app that’s copied most of Snapchat’s top features and has in fact outpaced its competitor. Facebook’s Instagram Stories now boasts 250 million daily users, compared to 166 million for Snap.

Add in the fact Instagram has leveraged its Facebook advertising ties to better monetize its platform, while at the same time making its app creator-friendly, and you begin to see why Snap is at a crisis point.

“As a brand, [Snap] will continue to be crippled, because they didn’t move fast enough in many ways. What they should’ve done is come up with a second act far sooner, and not invent the second act at 35,000 feet,” said Schiffer. “Those kind of situations typically crash and burn.”

To be fair, Snap, has outlined an ambitious second act: investing in 3-5 minute original shows, doubling down on new features (including today’s addition of voice filters and backdrops), and selling advertisers on its young demographic. Just last month, Snap inked a deal with Time Warner that will bring in $100 million in shows and ads. Factor in its formidable base of users, and no one seems ready to write it off just yet.

But to Schiffer, Snap is cutting “relatively small deals” — less a sign of its strength and more of an indication marketers will throw money at anything trendy.

For now, retail investors are waiting to see the strategy pay off for Snap before placing their bets. That’s why the share price has dwelled in stock purgatory since its IPO, even as Facebook has jumped 12 percent in the same time.