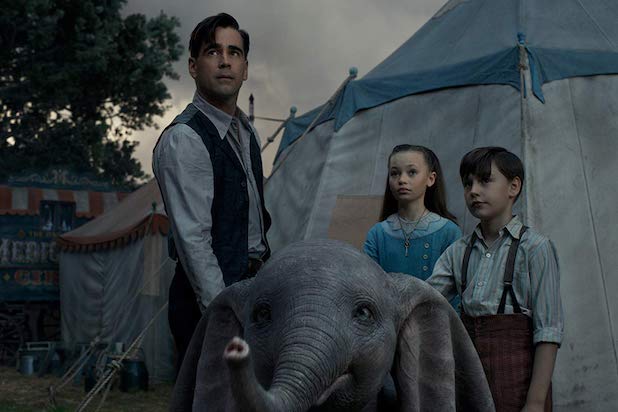 The first of three Disney remakes in 2019 will hit theaters this weekend, as Tim Burton’s “Dumbo” will try to take flight despite lukewarm reviews and a relative lack of audience nostalgia weighing it down.

While the other two remakes, “Aladdin” and “The Lion King,” are aiming to gross more than $1 billion worldwide this summer, “Dumbo” will aim for lower heights. Independent trackers are mixed on the film’s prospects. One tracker is projecting a $50 million-plus opening, which is the target Disney is setting. Another tracker, however, is projecting a lower opening at around $40 million.

Also Read: Jordan Peele's 'Us': All the Horror References We Found So Far (Photos)

Either way, an opening in this range would be lower than even other recent remakes of Walt Disney-era animated films. The 2015 remake of “Cinderella,” for example, opened to $67.8 million domestic from its March release slot, going on to gross $201 million domestic and $543.5 million worldwide.

Part of this lack of buzz compared to other released and upcoming Disney remakes is the lack of nostalgia for the original 1941 “Dumbo.” While a whole generation of millennials grew up on Disney Renaissance titles like “The Lion King,” “Aladdin” and “Beauty and the Beast,” far fewer grew up with the tale of the elephant who could fly.

And unlike Jon Favreau’s remake of “The Jungle Book,” “Dumbo” may not have the technical wizardry or strong cast to draw audience interest in place of the nostalgia factor. With “Shazam!” likely to be a tough competitor for family audiences next weekend, “Dumbo” might end up being seen as the runt of the litter compared to Disney’s otherwise powerhouse 2019 lineup of Marvel films, “Star Wars,” animated sequels and remakes of beloved ’90s classics.

“There have been some classic Disney films that have had multiple theatrical re-releases, ‘Dumbo’ never really had that,” said Exhibitor Relations analyst Jeff Bock. “‘Snow White’ and ‘Sleeping Beauty’ are true diamond classics but ‘Dumbo,’ which is about an hour long, never really reached that status.”

Loosely based on the original film, “Dumbo” follows a former circus star (Colin Farrell) and his two children (Nico Parker and Finley Hobbins), who are tasked by struggling circus owner Max Medici (Danny DeVito) to take care of a baby elephant with giant ears. But when the laughingstock elephant turns out to be able to fly, the ensuing resurgence in the circus’ popularity draws the attention of a shady businessman (Michael Keaton) who wants Dumbo to be the centerpiece of his new amusement park.

“Dumbo” also stars Eva Green and Alan Arkin, and is directed by Burton from a script by Ehren Kruger. It currently has a 48 percent score on Rotten Tomatoes.

Meanwhile, Universal/Monkeypaw’s “Us” will enter its second weekend after earning a $71 million opening that was the largest launch for any original film since “Avatar.” Now the question is whether Jordan Peele’s critically-acclaimed nightmare will endure at the box office in a similar way to how “Get Out” persevered two years ago.

In April, “Us” will face competition heavier than what “Get Out” faced, as “Pet Sematary” will cater to hardcore horror fans while superhero films like “Shazam!” and “Avengers: Endgame” will peel off general audiences. But this weekend, with cultural buzz around the film still strong, Bock says there is a chance that “Us” could see a second weekend total of around $40 million, possibly holding on to the No. 1 spot if “Dumbo” under-performs.

“‘Get Out’ wasn’t expected to be the must-see film it ended up being, so many moviegoers were slow to go see it and that allowed it to leg out in theaters,” Bock said. “In its second weekend [it] had a drop-off of just 15 percent. That’s not going to happen with ‘Us,’ but a drop of 40-50 percent would still be remarkable considering how front-loaded horror films tend to be.”