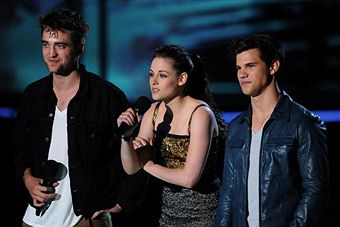 It may sound crazy, but believe it or not, the MTV Movie Awards used to mean something once upon a time. Unfortunately, the show’s relevance to pop culture has long since passed, as "Twilight" fever has sunk its ratings-craving fangs into a worldwide broadcast that has become a pale imitation of its former self, at least as far as the actual awards are concerned.

Years ago, MTV bestowed its Golden Popcorn award for Best Movie on great, popular films that may or may not have been considered "Oscar material." However, recent winners have been ridiculous blockbusters of questionable quality.

The fact is that beginning in 1992, the first six Best Movie winners were “Terminator 2: Judgment Day,” “A Few Good Men,” “Menace II Society,” “Pulp Fiction,” “Se7en” and “Scream.” All were rated R. In 1998, the PG-13 “Titanic” briefly (and deservedly) interrupted the R-rated winning streak before “There’s Something About Mary,” “The Matrix” and “Gladiator” returned the risque rating to awards glory. Since then, the only other R-rated Best Movie winner was “Wedding Crashers” in 2006. Now, most (if not all) of those movies fit my definition of a “modern classic,” so MTV deserves credit for being on top of its game in honoring influential films that, for the most part, have withstood the relative test of time.

That said, "Pirates of the Caribbean: Dead Man’s Chest" and "Transformers" started a troubling trend in recent years, and the last two Best Movie winners have been the goth romance blockbusters “Twilight" and its sequel, "New Moon."

I don’t begrudge the "Twilight" movies their incredible financial success because, with the exception of “Menace II Society,” all of the Best Movie winners listed in the previous paragraph made over $100 million at the domestic box office. I take exception with the “Twilight" movies because they’re both mediocre, at best, and their triumphs illustrate a growing problem; Where the MTV Movie Awards once honored challenging adult material that also appealed to a youthful demo, voters are now confusing the biggest movies with the best, allowing the show to be content existing as a popularity contest as decided by the high school crowd, which is, of course, MTV’s bread-and-butter demographic.

It’s a dark day in MTV Movie Award history when a game-changer like James Cameron’s "Avatar" and, to a lesser extent, the star-less R-rated comedy "The Hangover" lose Best Movie to a "Twilight" sequel that was inevitably destined to win as a result of teenage girls stuffing the ballot box to ensure more TV time for its dreamy stars Robert Pattinson and Taylor Lautner.

Pattinson and double nominee Kristen Stewart won Best Kiss for the second consecutive year, yet the real-life couple looked positively awkward during their half-hearted attempt to kiss for the live cameras. Pattinson won Best Male Performance over last year’s winner … Zac Efron. Anna Kendrick was named Best Breakout Star for her turn in "Up in the Air," and not to take anything away from her excellent performance in that film, but it’s obvious that she won because she plays a minor character in the "Twilight" films and has the full support of that vote-happy fanbase. Do you really think more voters saw and appreciated Kendrick in "Up in the Air" than Chris Pine in "Star Trek" or Zach Galifianakis in "The Hangover"? How can anyone take the show seriously when Stewart wins Best Female Performance (again!) over "The Blind Side" star Sandra Bullock, who actually won an Oscar for that film earlier this year.

Of course, the MTV Movie Awards aren’t supposed to be the Oscars. Its primary goal is to entertain a few million teenagers for a couple hours, not to get the awards “right.” I just hope the ratings boost was worth the non-stop cutaways to Bella, Edward and Jacob.

I know MTV targets a younger, more PG-13 audience these days, and I’m not asking for voters to show some love to Jeremy Renner ("The Hurt Locker") or Helen Mirren ("The Last Station"), but I wish they would hold themselves to the same standards as MTV’s audience in the ’90s, which apparently had much better taste. Fortunately, in ten years, “Avatar” and “New Moon” won’t even be mentioned in the same breath, let alone the same category.

Until then, get used to seeing Stewart looking nervous and uncomfortable at the podium. Trust me, the Meryl Streep of the MTV Movie Awards isn’t going anywhere anytime soon thanks to the so-called "Twi-hards" who have fueled the success of “Twilight” and "New Moon" at the last two award shows. Their powerful online presence indicates that audiences can look forward to a "Twilight: Eclipse" sweep next year, and in the future, not one but two MTV Movie Award shows dominated by both of Summit’s "Breaking Dawn" sequels.

Hopefully host Aziz Ansari and scene-stealer Tom Cruise will find it in their hearts to return to a broadcast that quite frankly, doesn’t deserve them. Otherwise, I see no point in watching what will otherwise be a foregone conclusion: "Eclipse" will cast a long shadow over the rest of the nominees and win the Golden Popcorn for Best Movie (and plenty of other awards) next year.

Jeff Sneider is a 2006 graduate of New York University's Tisch School of the Arts. An aspiring screenwriter, he holds a BFA in Dramatic Writing. He started his career writing film reviews on Ain't It Cool News, and continues to contribute reviews to the Colorado Springs Independent. Jeff spent two years as a writer/editor for Variety, and has also written for Hollywood Life, the MTV Movies Blog, Thompson on Hollywood and Examiner.com. In September 2006, Jeff was knocked out by director Uwe Boll in a boxing match/publicity stunt that has since become a footnote in pop culture history. He has appeared in Michael Addis' documentary “Heckler” and on HBO's “Entourage,” and is proud to have briefly worked as a production assistant on “The Departed.” He enjoys playing basketball and volleyball and his favorite movie is “Pulp Fiction.” Jeff maintains a personal awards season blog, TheInSneider (www.theinsneider.blogspot.com).
KEEP READING..