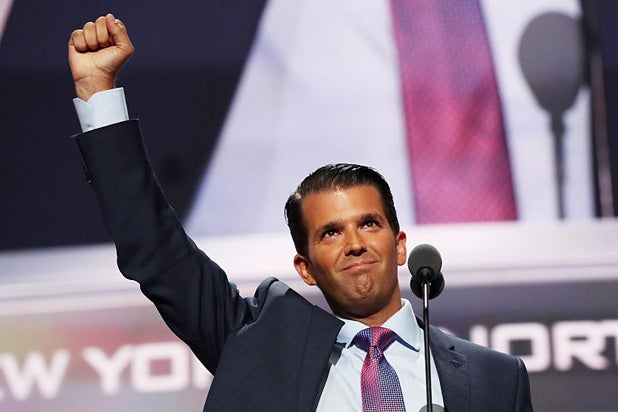 Wikileaks co-founder Julian Assange is in desperate need of a pen pal while holed up in the Ecuadorian embassy in London, apparently.

A new report from The Atlantic highlights several direct messages it says it obtained that were composed from the Wikileaks Twitter account and sent to Donald Trump Jr., before and after the 2016 U.S. election. (The Atlantic said the Twitter DMs are part of a congressional investigation into Russian meddling in the election.)

Wikileaks, the self-described “transparency organization” — which has made a name off releasing classified information — wanted to work with the president’s son on several under-the-radar projects, including sharing its work and, most glaringly, contesting the results of the election.

At the time, Hillary Clinton seemed en route to a victory on election day. The Wikileaks account sent Trump Jr. a direct message hours before results were finalized, imploring him to urge his dad to push back on the final tally.

“Hi Don if your father ‘loses’ we think it is much more interesting if he DOES NOT conceed [sic] and spends time CHALLENGING the media and other types of rigging that occurred–as he has implied that he might do,” the Wikileaks Twitter account sent to Trump Jr., according to the report.

Trump Jr. didn’t respond. As The Atlantic put it, he “mostly ignored” the Wikileaks Twitter messages, but “at no point” rebuffed them.

On Oct. 3, 2016, the account reached out to Trump Jr. and asked him to share a quote from Hillary Clinton asking if they could “just drone” Assange. “Already did that earlier today,” Trump Jr. responded later. “It’s amazing what she can get away with.”

Trump Jr. also responded to a Wikileaks message on an anti-Trump political action committee in Sept. 2016, saying he’d “ask around”; he then emailed Steve Bannon, Kellyanne Conway, and brother-in-law Jared Kushner to see if they’d heard anything.

Also Read: Trump Is About to Shatter His Personal Twitter Record

Other requests from Wikileaks went without a response, according to the report. The account asked Trump Jr. about leaking his father’s tax returns, and the possibility of pushing Assange — who has been in hiding for five years to avoid a rape charge in Sweden, and now extradition to the States — as an Australian ambassador to the USA.

Attorney Alan Futerfas told The Atlantic Trump Jr. has worked with Congressional authorities looking into Russian meddling in the 2016 election.

Also Read: John Oliver Hilariously Breaks Down a Trump Speech: 'Staggering How Incoherent He Is' (Video)

“Over the last several months, we have worked cooperatively with each of the committees and have voluntarily turned over thousands of documents in response to their requests,” said Futerfas. “Putting aside the question as to why or by whom such documents, provided to Congress under promises of confidentiality, have been selectively leaked, we can say with confidence that we have no concerns about these documents and any questions raised about them have been easily answered in the appropriate forum.”