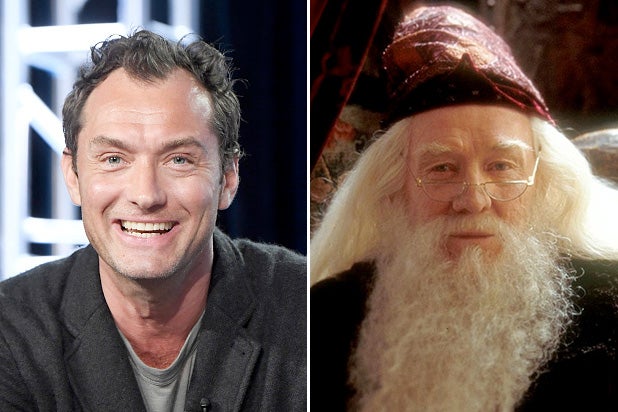 Twitter is mostly ecstatic over Jude Law’s casting as young Albus Dumbledore in the upcoming “Fantastic Beasts and Where to Find Them” sequel — especially as J.K. Rowling has previously hinted that Dumbledore will be openly gay in the follow-up.

“As far as his sexuality is concerned – watch this space,” the author said in November.

Law will star opposite Johnny Depp who plays Gellert Grindelwald, the dark wizard whom Dumbledore became famous for defeating in the backstory of the original “Harry Potter” novels. But, as hardcore Pottermaniacs know, in 2007, Rowling revealed that Dumbledore was gay, and that his relationship with Grindelwald was much deeper than he would ever openly admit.

As detailed in the final “Harry Potter” novel, “Harry Potter and the Deathly Hallows,” the Hogwarts headmaster considered his defeat of Grindelwald the darkest moment of his life. Grindelwald was his childhood friend, and the two bonded over a plan to establish a world where wizards ruled over normal humans “for the greater good.” But after a duel between them and Dumbledore’s brother led to the death of Dumbledore’s beloved sister, Dumbledore rejected Grindelwald’s ideals. Decades later, coinciding with the end of World War II, Dumbledore reluctantly faced and defeated the man he’d been so close to.

With Law set to portray Dumbledore years before he took charge of Hogwarts, Potter fans are hoping that they will get to see the romantic tension between the two powerful wizards play out on screen.

Everybody: oh yay Jude Law is playing young gay Dumbledore.
Also everybody : but he has to kiss Johnny Depp pic.twitter.com/XjclrLxCpj

Jude Law is playing a young, hot, and gAY DUMBLEDORE IN THE NEXT FANTASTIC BEASTS IM SWEATING ALREADY

A romantic subplot for young, gay Dumbledore? I would be here for that.