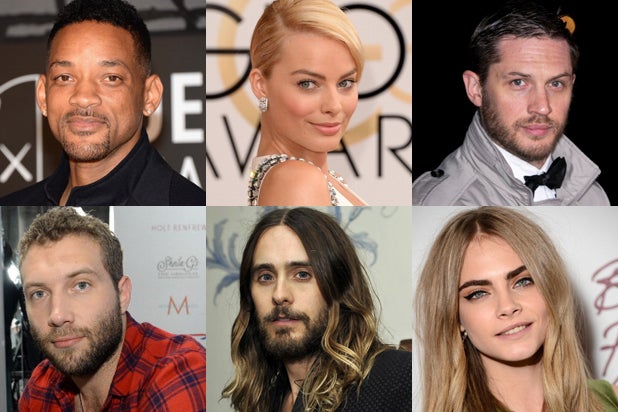 The six actors will play DC Comics’ famed team of super villains, with Smith as Batman villain Deadshot, Hardy as Rick Flagg, Robbie as Harley Quinn, Leto as The Joker, Courtney as Boomerange and Delevingne as Enchantress.

As TheWrap first reported, Leto is taking over the iconic role of The Joker from the late Heath Ledger, who won a posthumous Oscar for his performance as Batman’s arch-enemy in “The Dark Knight.”

Jesse Eisenberg is also in talks to reprise his role as Lex Luthor, who makes his debut in “Batman v Superman: Dawn of Justice.” The studio is also seeking a middle-aged African American actress to play Amanda Waller, who functions as the Nick Fury of the DC movie universe. Viola Davis is one of several actresses being considered for the role.

“The Warner Bros. roots are deep on this one. David Ayer returns to the studio where he wrote ‘Training Day’ and brings his incredible ability to craft multidimensional villains to this iconic DC property with a cast of longtime Warner collaborators Will Smith and Tom Hardy, and other new and returning favorites: Margot, Jared, Jai and Cara. We look forward to seeing this terrific ensemble, under Ayer’s amazing guidance, give new meaning to what it means to be a villain and what it means to be a hero,” said Greg Silverman, president of creative development and worldwide production at Warner Bros. Pictures.

Ayer is also writing the script for “Suicide Squad,” which is being produced by Charles Roven and Richard Suckle.  Zack Snyder, Deborah Snyder, Colin Wilson and Geoff Johns are serving as executive producers.