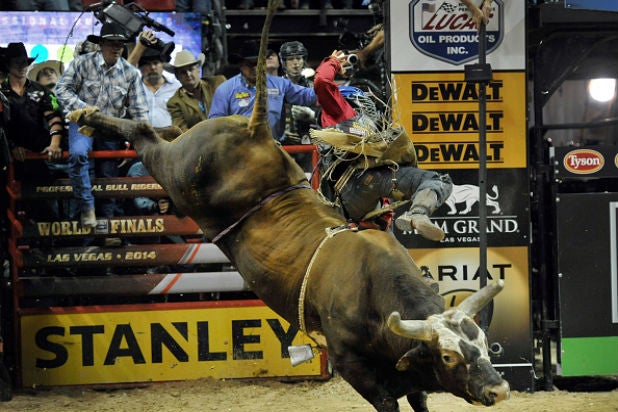 WME-IMG announced Wednesday that it has signed an agreement to acquire the Professional Bull Riders, Inc. (PBR), the world’s premier bull riding circuit.

With more than 300 bull-riding events globally each year, attended by over 3 million people, the PBR is the fastest growing sport in the United States.

Headquartered in Colorado, PBR reaches more than 550 million households in more than 40 countries, and is led by chairman and CEO Jim Haworth.

See Photos: 17 of the Most Dramatic Sports Movie Moments: From ‘Rocky’ to ‘McFarland, USA’

“We’ve worked closely with the PBR for the last several years and share their passion for expanding the sport of bull riding globally. The resources across WME-IMG make the partnership a perfect match, combining top quality event production and broadcast rights,” said WME-IMG co-CEOs Ari Emanuel and Patrick Whitesell.

Bull riders from all over the globe compete on the elite PBR Built Ford Tough Series, the BlueDEF Velocity Tour, the Touring Pro Division, and the PBR international circuits in Australia, Brazil, Canada and Mexico. The PBR was founded in 1992 by a group of 20 bull riders who sought mainstream attention for the sport.

Bull riding has been on Hollywood’s mind lately, as the Nicholas Sparks adaptation “The Longest Ride” centers around a champion bull rider (Scott Eastwood) struggling to reclaim his former glory after an accident.

The transaction is subject to customary closing conditions, including antitrust regulatory approval, and is expected to close in May 2015. Terms of the transaction were not disclosed.

WME-IMG is purchasing the PBR from the controlling shareholder, Spire Capital Partners, a leading private equity firm based in New York, as well as other shareholders. The Raine Group and Paul, Weiss, Rifkind, Wharton & Garrison LLP served as WME|IMG’s financial and legal advisors, respectively, and the PBR was advised by financial advisors Evercore and legal advisors Dentons.