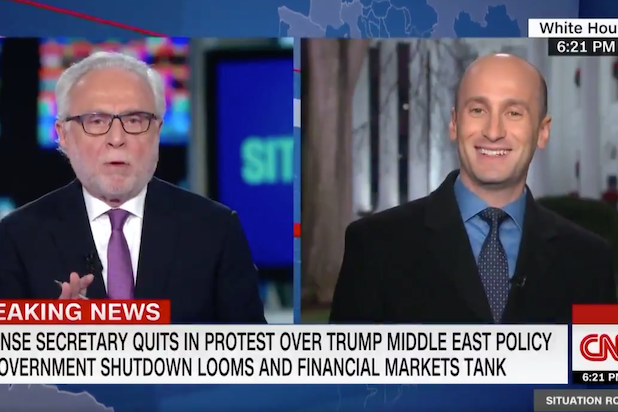 Stephen Miller, the incendiary White House advisor, went on CNN’s “The Situation Room” Thursday to defend President Trump’s border wall. Instead, he got a rare smackdown by the normally stoic Wolf Blitzer.

The political anchor began his interview by asking why President Trump was not able to get the wall built while Republicans still had control of both the House and Senate.

An animated Miller explained that “the fight is only beginning,” adding that, “right now as we speak, there is a surge of illegal immigration heading towards our country that presents a national crisis now. Not a month from now, not a year from now, right now.”

Blitzer tried to interject but was unable to stop Miller from talking.

“How many more citizens have to die in the pursuit of an open-borders agenda?” Miller asked, with his voice still rising.

He got an answer, though likely not the one he was expecting.

“Calm down a minute, we don’t have to yell,” Blitzer told him. “These are important policy issues that we’re discussing. The American people have a right to know where you and the president, the White House stands.”