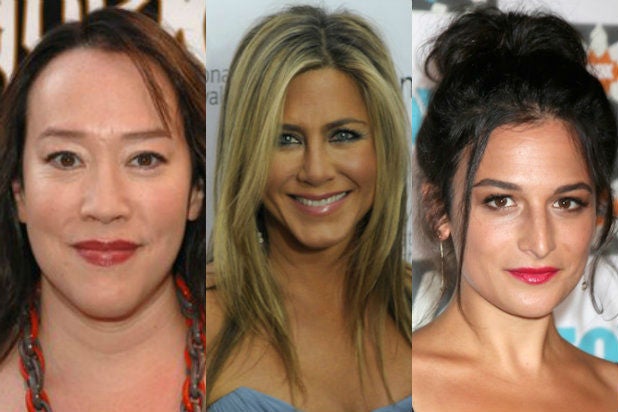 In the midst of this year’s Sundance Film Festival, powerful Hollywood women will march in protest against President Donald Trump — and their voices will be equally heard in the content playing in films to be screened over the next 10 days.

Marching into the movie houses of Park City are diverse stories from female filmmakers — and a healthy amount of leading ladies pulling double duty as producers.

It’s not just that women are appearing more frequently in below-the-line credits, the lineup has a roundedness of storytelling that inches closer to an ideal form of equal representation.

Jennifer Aniston is executive producing a war movie. Four women are cooking up a horror franchise. One is taking on the sad objectification of a slain toddler beauty queen. Another is turning her relationship drama into rock ‘n’ roll.

Zoe-Lister Jones is the writer-director behind “Band Aid,” in which a feuding couple starts writing and singing rock songs about their relationship troubles as a Hail Mary to stay together. The star of CBS’ “Life in Pieces” also produced her own debut feature under her banner Mister Lister Films.

Magnolia Pictures has “XX,” a groundbreaking horror anthology with some high-profile women directing four vignettes. The project is a billboard decrying the boys club of horror, and looks seriously twisted to boot.

The directors are Karyn Kusama (behind 2016’s criminally underrated “The Invitation”), Roxanne Benjamin (a producer on “V/H/S”), Jovanka Vuckovic and debut filmmaker Annie Clark (whose day job is a musician under the stage name St. Vincent).

Also making her directorial debut in the Shorts program is Clark’s girlfriend, former “Twilight” actress Kristen Stewart. She also scripted “Come Swim,” about a day in a man’s life, a project that has drawn early buzz for its artistry and tone. The short is part of Refinery29‘s Shatterbox Anthology.

Aniston is executive producing and co-starring in Alexandre Moors’ “The Yellow Birds,” based on an acclaimed novel about two young Iraq war vets who are best friends in combat though only one of them returns home. The former “Friends” star plays the mother of the fallen hero — one not weeping in a veil, but driving the narrative by leading an investigation into her son’s death with the help of a tough detective (Jason Patric).

Then there’s “Beach Rats,” a film that’s drawn buzz from several top dealmakers. Writer-director Eliza Hittman’s feature follows a young boy whose terminally ill father has crippled his home life. He’s also dating a young woman and hooking up with older men on a nearby beach.

In the U.S. Dramatic competition, Gillian Robespierre reunites with her “Obvious Child” producer and star Jenny Slate. They’re in town with “Landline,” a look at an analog New York in the 1990s. Specifically, how easy it was to cheat and lie without a GPS tracker.

Althea Jones also has “Fun Mom Dinner” with funny lady Bridget Everett and Toni Collette, which one executive compared to the STX blockbuster “Bad Moms” but with a lot more heart.

And writer-director Maggie Betts comes with “Novitiate,” which centers on Margaret Qualley as an apprentice nun in the 1950s.

In the Documentary competition, Amanda Lipitz has a very strong entry with “Step” — another title dealmakers are talking about — which follows a step team in inner-city Baltimore as they struggle with pending adulthood, social unrest and empowering each other.

Kitty Green looks at the other side of that coin, about the circus surrounding girls pageants and its most famous contestant — JonBenet Ramsey and her tabloid-fodder 1996 murder.

War, toddler beauty queens, unseen horrors, confessions from motherhood and life without cell phones all coming from the minds and elbow grease of women.

“It really comes down to voice,” one agent representing over a dozen of the female-backed films told TheWrap. “But I’m not going to lie, ladies are kicking ass this year.”