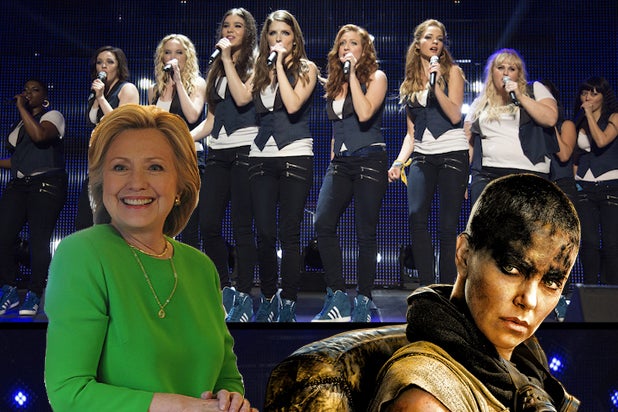 As Hillary Clinton’s run for the presidency is destined to make history, Hollywood is waking up to the profitability of female-centric cinema. The studios need to realize that they should not be making movies only geared to young men, and this just might be the summer that proves that premise false.

While the ACLU took on the cause of the embarrassingly low number of female directors directing in Hollywood, Elizabeth Banks and her sparkling crew of talented singers and comedic actresses were breaking box office records with “Pitch Perfect 2.” The worldwide box office is already nearly $230 million, and its opening weekend beat out the action thriller “Mad Max: Fury Road,” notably, according to reviews, whose female star Charlize Theron stole the movie from her male counterparts.

I usually make it a policy not to see any movies with a number in its title — except for “The Godfather,” of course. However, I am glad to have broken my personal pledge and seen the sequel to a film that celebrates girl power. I thoroughly enjoyed watching these talented actresses belt it out and bond over their group effort to beat their competition. I am sure I should be more culturally sensitive that their biggest challenge was a very Teutonic like German team who made you think World War II was not quite over.

Also Read: Who Got the Last Laugh on 'The Ridiculous Six' Movie Set? (Guest Blog)

Curiously, it will be a real summer matchup to see how the male-centric cinema version of the HBO television hit “Entourage” operates at the box office this week. Will girl power beat the band of boys coping with Hollywood?

If “Entourage” does win out, it’s because Jeremy Piven‘s role as Ari portrays the neurotic Jewish agent we have grown to love. Who knows, maybe because some of us older fans who adore Piven playing the department store owner in “Mr. Selfridge” on PBS, we’re compelled to see him sparkle as a high-strung agent in “Entourage.” The hysterical Jewish jokes versus the grosser ones in “Pitch Perfect 2” might also help attract viewers.

If you want to appreciate an independent feature that offers a quieter theme of love and betrayal, see Maxime Giroux’s, “Felix and Meira.” This independent film offers a lovely love story between an Orthodox Jewish woman, who seek more than the confines of her religion and statue as a rabbi’s wife, and a lost-soul neighbor that forms in Montreal and ends in Venice. Combining the languages of English, French and Yiddish, the script portrays as much of what is said and not what is not said between couples and family members. “Felix and Meira” is an unique antidote to the summer fare.

Talking about women power, in my hometown of Washington, D.C., there was just exciting entertainment news announced by a group of women about the new arrival of an animation studio, called Pigmental Studios, to be located at Gallaudet University.

“We look forward to working with Pigmental and Gallaudet to support their efforts to grow the District’s creative economy,” Bowser said.

This new addition to the nation’s capital puts us in a great position to attract more film enterprises. Pigmental had announced its current project, “Kong,” at the Cannes Film Festival in May 2014, and it is being produced as a Chinese co-production with producers Gary Zhang and J.J. Kim of Aquamen Entertainment. The first animated feature that will be produced in the District will be announced as a co-production with the creator of “Despicable Me,” Sergio Pablos.

The dynamite Martins explained why she is setting her sights on the nation’s capital with a feeling of social consciousness.

“The District is a unique and ideal location for us to expand our business,” she said. “We are excited to be a part of the innovation economy here and to inspire the community’s youth to embrace the STEM disciplines through the art of animation, as well as provide opportunities for new jobs in the District.”

Pigmental will start work on an animated feature film and TV series in its new location this fall.

The D.C. Office of Motion Picture and Television Development (MPTD), beginning with its former head Pierre Bagley, played an instrumental role in attracting Pigmental to the nation’s capital. Once the robust animation company is off the ground, the District should attract more entertainment companies.

One can dream politics would be overshadowed by movie and television production here.

As Gates explained, “Attracting animation companies and professionals is a critical component to our effort to build a first-class creative economy here in the District. Having Pigmental build its headquarters here in the nation’s capital is a game changer and we are thrilled to have them as a partner.”

Hopefully our city will be more than a backdrop for shots of the White House, and women are leading the charge to make this happen.