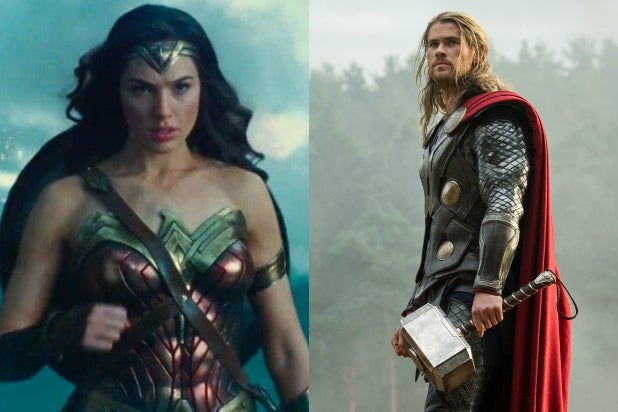 “Wonder Woman” has landed in major markets around the world, and it’s sizing up to be an Amazonian-sized hit overseas, raking in an estimated $12.1 million abroad on its Thursday debut in 32 markets, pushing its international total to $18.7 million.

The DC Films movie out of Warner Bros. starring Gal Gadot is already out ahead of the 2011 Marvel hit “Thor,” starring Chris Hemsworth, in at least three major international markets: Brazil (by a whopping 79 percent), the U.K. (by 17 percent) and more than double in Russia.

What’s more, the new superheroine flick directed by Patty Jenkins has lassoed in higher debut figures than Superman himself in some markets, beating the opening day of 2013’s “Man of Steel” in Brazil (by 31 percent) and Russia (by 6 percent).

The opening day of “Wonder Woman” also bested 2013’s “Wolverine” by an impressive 30 percent in the U.K., where it also surpassed “Captain America: The First Avenger” by 11 percent. The film handily beat “Pirates of the Caribbean: Dead Men Tell No Tales” and “Baywatch” — both in their second weekends — for a No. 1 debut in the region across the pond.

“Wonder Woman” got off to a strong box office start in Asian markets on Wednesday, grossing $6.3 million in six international markets, including Taiwan, Korea, Hong Kong, and Indonesia.

Domestically, the film powered to an estimated $11 million at the Thursday previews.

“Wonder Woman” follows Diana Prince a.k.a. Wonder Woman (Gadot) as she leaves her home of Themyscira to stop the great war after a pilot lands on the island, and tells her about what is happening outside of the bubble that is Diana’s home.