Woody Allen may be 80 years old, but the prolific auteur shows no signs of slowing down.

The four-time Oscar-winning director, whose romantic dramedy “Café Society” opens in theaters on Friday, fully plans to keep up his pace of making one film per year, according to Allen’s long-time producer (and real-life sister) Letty Aronson.

“Knock on wood, he is in amazingly good health and energetic,” Aronson told TheWrap ina  phone interview. “He still feels he can continue making a film every year.”

Allen has also written, directed and acted in an untitled six-episode TV series for Amazon Studios, which will roll out later this year. Amazon also acquired “Café Society” after the filmmaker’s long partnership with Sony Pictures Classics. (Lionsgate is handling theatrical distribution on the new movie.)

Aronson admitted that Amazon has a more corporate culture than she’s used to. “There they have a lot of layers of people,” she said. “It’s different working with that level of bureaucracy, but they’ve been very good with making sure Woody has what he needs.”

“Café Society,” set in the 1930s, follows the bicoastal adventures of Bobby Dorfman, played by a Woody Allen-esque young man (Jesse Eisenberg)  who hopes to break into Hollywood with the help of his uncle, a high-power agent played by Steve Carell. 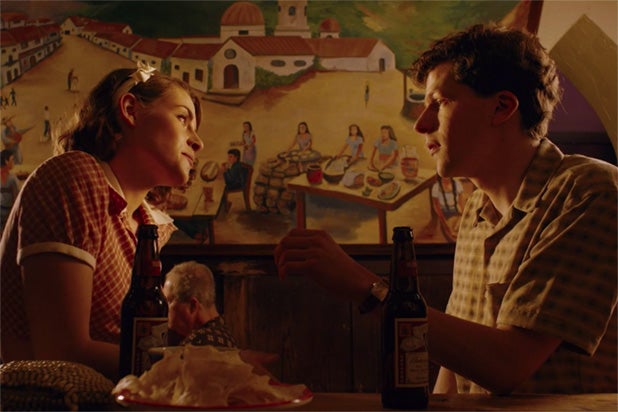 Both men find themselves in a love triangle with a young agency assistant (Kristen Stewart). The heart of the story shifts back to the East Coast when Bobby moves back to help his brother (Corey Stoll) run a swanky night club.

The film has been receiving warm reviews ever since it debuted at Cannes in May, with a current Rotten Tomatoes score of 77 percent.

Like many Allen films, it features an ensemble cast of actors also including Blake Lively, Parker Posey, and a blink-and-you’ll-miss-it appearance by Sheryl Lee.

Eisenberg is not doing a Woody Allen impersonation in the film per se, Aronson insisted. “Have you heard him talk with his normal voice?” she said. “That’s how he talks.”

It just so happens he sounds a lot like Allen. “Of course, if this had been so many years ago, it would have been a part Woody would have played,” said co-producer Edward Walson, who collaborates frequently with both Allen and Aronson.

“Café Society” represents another first for Allen: It’s his only feature so far that hasn’t been shot on physical film.

Yes, Woody Allen has gone digital. And he did it right, working with three-time Oscar-winning cinematographer Vittorio Storaro (“Apocalypse Now”) to achieve the movie’s gorgeous shots and camera movements. “It was a great first-time collaboration for both of them,” Walson said.

Even as he finishes editing on the Amazon TV series, he has begun prepping his next feature — which will star Kate Winslet, Jim Belushi, Justin Timberlake and Juno Temple.

Work on the TV series pushed the start of production back from his usual summer start to September. “Other than that,” Aronson said, “it’s no problem at all for him to make one film a year.”