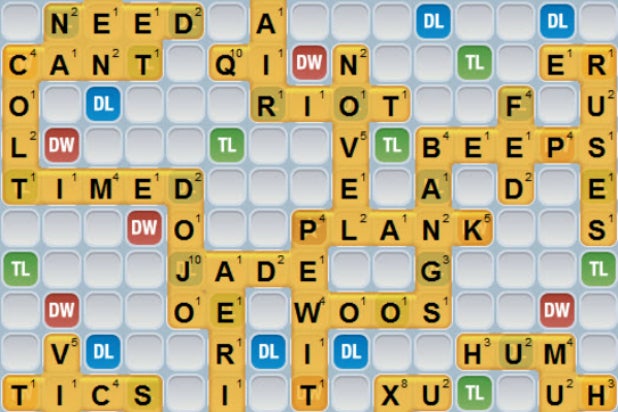 Either way, MGM Television and social game developer Zynga are teaming up to turn “Words With Friends” into a TV game show. The series “will also incorporate aspects from Zynga’s larger portfolio of ‘With Friends’ word and puzzle games,” according to a Wednesday media release.

“The interactive social experience of ‘Words With Friends’ makes it the perfect mobile game for us to bring to primetime, following our success with ‘Beat Shazam’ on Fox,” said Barry Poznick, president of Unscripted Television, MGM. “Playing ‘Words’ is a daily ritual for some of the biggest names in Hollywood and we’ve created the perfect format to capture their competitiveness and creative wordplay.”

“Over the past eight years, ‘Words With Friends’ has proven to be a place where millions of people connect with their friends and family from around the world every day,” added Bernard Kim, president of Publishing, Zynga. “We’re proud to partner with MGM, an industry leader in creating innovative and engaging programming, to extend the iconic gameplay and rich social experience of ‘Words With Friends,’ and our broader collection of ‘With Friends’ games, to new mainstream entertainment mediums.”

The companies should hope that “Words With Friends” eventually performs like “Candy Crush” on CBS did in its first week’s Nielsen ratings, and not how the second episode fared.