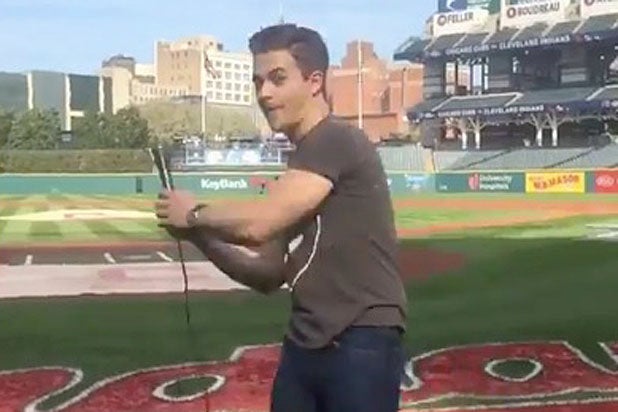 As the Cleveland Indians and the Chicago Cubs took to the field Tuesday night to decide who makes baseball history in the 2016 World Series, fans had plenty to gripe about on social media.

Country singer Hunter Hayes followed in the footsteps of Fall Out Boy vocalist Patrick Stump to sing the national anthem ahead of Game 6 at Progressive Field, but he got a reception that was as cold as the wind whipping off Lake Erie.

“Hunter Hayes sounds like a pillowcase full of kittens being slung against a curb,” one Twitter user wrote.

Others simply asked who the hell he was, and some predicted that his mere presence on the mound meant that the Cubs were going to force a Game 7.

Fortunately for the 25-year-old “Wanted singer — which sold over 3.5 million copies and made Hayes the youngest male act to ever top the Billboard Hot Country Songs — the actual game is so historic that fans of both teams will quickly forget that he was ever there.

The Indians are vying for there first World Series win in 68 years and the Cubs are attempting to end a 108-year drought after being cursed by a smelly goat.

In other words, there are far more important things happening at the Cleveland tonight than his national anthem rendition.

See the mean tweets below.

Hunter Hayes sounds like a pillowcase full of kittens being slung against a curb.

Who the heck is @HunterHayes, and what idiot gave him a mike to spoil the #NationalAnthem for me? #WorldSeries @MLBONFOX

"Nice job, Hunter Hayes" – WAS it, though? #JustSaying #WorldSeries

Hunter Hayes out for the anthem, Cleveland? This is going 7.

Hunter Hayes, you a janitor, baby? You switchin' keys like a mofo…#WorldSeries

Who is Hunter Hayes? *mute*

In case you missed it and or just want to relive Hayes’ performance, here it is.

For anyone who wants to see @HunterHayes perform the National Anthem ???????? pic.twitter.com/ZqTiu6iy0o