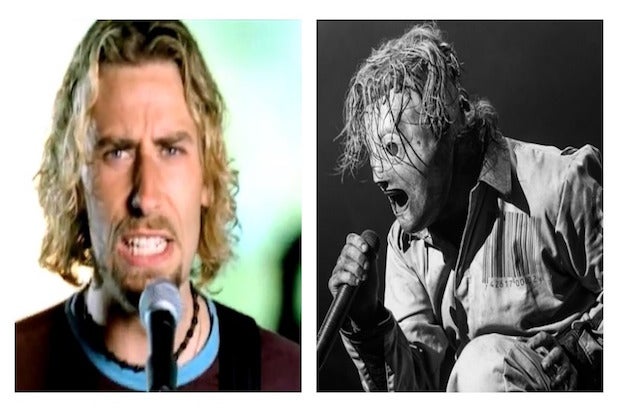 “Are we having fun yet?” Chad Kroeger, the lead singer of Nickelback, certainly isn’t, and neither is Slipknot frontman Corey Taylor. The two rockers have gotten themselves wrapped up in a battle of unkind words.

The bizarre feud started last week when Kroeger made fun of Slipknot’s signature look in an interview with Metal Covenant, via NY Daily News. (The Iowan metal band performs in spiky black jumpsuits and creepy masks, a la Jigsaw or Jason Voorhees.) Kroeger reportedly said, “They had to put on masks and jump around. How good can your music be if you’ve gotta beat each other up on stage, throw up in your own masks every night? I mean, music shouldn’t come with a gimmick; music should just be music.”

Kroeger also insulted Taylor’s other band, Stone Sour, referring to the group as “Nickelback Lite,” as in, a mediocre version of his own band. Stone Sour has been around since 1992, at least three years before Nickelback got its start.

Taylor came back at Kroeger with a few quips of his own. The “Psychosocial” singer appeared on Arizona’s 98 KUPD and said that Kroeger “is not a liked person.” Incidentally, Nickelback — and by association, Kroeger — is widely disliked by both critics and listeners. Taylor continued the insults: “You can run your mouth all you want. All I know is I’ve been voted ‘Sexiest Dude in Rock’ wearing a mask. You’ve been voted ‘Ugliest Dude in Rock’ twice without one. Stick that up your ass.” And also, “He’s got a face like a foot. Am I wrong?”

But wait! The plot thickens. Here comes Smash Mouth to save the day. The All Stars themselves attempted to mitigate the verbal battle on the 21st century’s prime medium for civil discourse: Twitter.

We see what Chad is saying but Slipknot has more than pulled it off. It feels authentic, they nailed it! They're American Icons.

It is unclear if this rock feud of the century has ended, but with Smash Mouth now involved, maybe both sides will shake hands and apologize in the end.