With Shaquille O’Neal off the line-up for WWE’s WrestleMania 33, there was a gap on the roster for a professional athlete.

And who better to fill his shoes than Rob Gronkowski? OK, well technically Shaq wears size 22 sneakers while the NFL’s best tight end is merely a size 16, but they are both unnaturally large human beings.

Gronk flew from New England to Orlando to back up his best buddy and aspiring superstar Mojo Rawley, who made his WrestleMania debut in the Andre the Giant Memorial Battle Royal Sunday night.

Also Read: Maria Menounos Says WWE's WrestleMania Is Like the 'Super Bowl and Oscars All in One Weekend'

Mojo was a hot favorite coming into the 20-person standoff, and while he’s newer to the WWE main roster than some of the veteran competition, it’s clear to pro wrestling pundits that he’s got a huge career ahead of him.

As contender after contender — including Big Show and Dolph Ziggler — were hurled out of the ring, fans began to notice a brightly-dressed six-foot-six Gronk learning over the ropes wearing a neon “Mojo” hat.

But when it got down to the final three and Jinder Mahal and Mojo flew through the ropes, Gronk went from spectator to part of the show, as he came to his buddy’s defense. And when Mahal dared to dump water on the big fella, the gloves — and Gronk’s “Stay Hyped” shirt — were off! 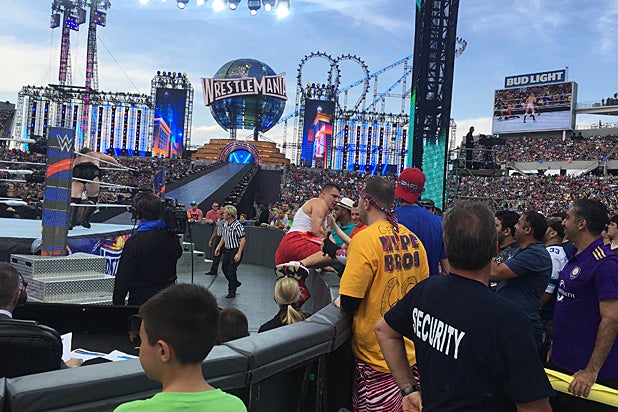 He belted over the ropes, throwing excess clothing at his brother Gordie Gronkowski Jr., and joined in the match — sparking squeals of concern among Patriots fans across the country worried about his recent back surgery (don’t word, Bill Belichick, he’s fine).

Needless to say, Mojo won the match with a little help from his mountain-sized friend, and the pair celebrated in true Gronk style in the ring afterwards, as both their families watched from the front row.

I was the first to declare. I will be the last one standing. This is my moment. You cannot take this from me. #MojoRising

The Zubaz-loving bros have been friends since Mojo — then going by his real name of Dean Muhtadi — played football at the University of Maryland with Rob’s brothers, Dan and Chris.

The two have been tight ever since — and not just because no one else can keep up with them when it comes to either partying or in the weight room.

“If there’s anyone in the WWE who has more energy than me, it’s Mojo,” WWE Superstar John Cena recently told TheWrap. “I’ve never seen that guy in a bad mood. He just keeps it coming.”

There’d been speculation that Gronk might be making a WrestleMania appearance, much to the delight of Patriots fans in the WWE like Stephanie McMahon and Maria Menounos since he and Mojo made an over-the-top training video following a “SmackDown” show in New England a few weeks ago.

Rob was seen putting Mojo through his training at his home gym in Massachusetts and punching him in the chest for motivation. Yep, they really do that — this is not (just) for the cameras.

(Disclaimer: This writer is friends with Rob Gronkowski and Mojo Rawley. She’s pretty happy about the match result).

WrestleMania 33 is currently airing live on WWE Network. Fans can sign up at WWENetwork.com.