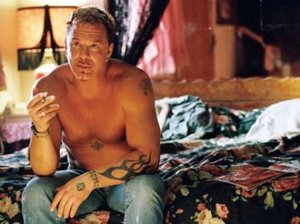 I had heard strong buzz about this film in Toronto, and apparently there’s good cause for it. Darren Aronofsky’s "The Wrestler," with Mickey Rourke in the title role, just won the Golden Lion at the Venice Film Festival.

The film is about a retired wrestler making his way through the independent circuit, hoping to make it back into the mainstream. This might be the story of Aronofsky himself, a talented maverick with early success ("Pi," "Requiem for a Dream"), who stumbled painfully when he hit the mainstream. In the wake of his big-budget debacle at Warner Bros, "The Fountain,"  Aronofsky has gone back to his scrappy, indie roots.  This movie was financed on a wing and a prayer, and the distribution rights are up for sale in the United States, but something tells me: not for long.

(Incidentally, Aronofsky must be in a pugilistic mood. He currently has a film in pre-production called "The Fighter.")