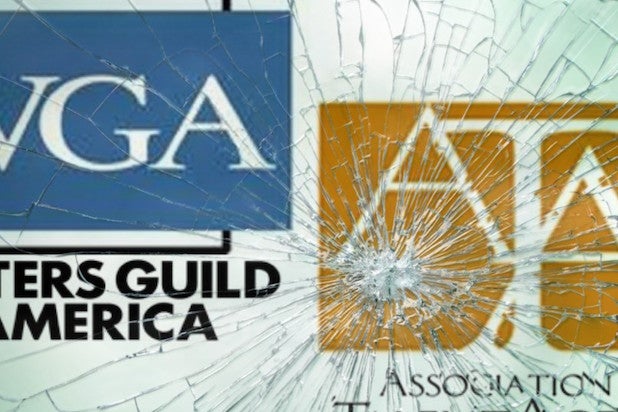 After Tuesday’s meetings between the Writers Guild of America and the Association of Talent Agents ended without progress, WGA released a new action plan for a mass-exodus from agencies, while ATA accused the guild of misleading members “with false information and horror stories” and warned of lost jobs and compensation.

The two groups met ahead of a four-day WGA member vote on a new code of conduct for talent agents designed to bring an end to package deals. If approved, the code would go into affect April 7 — one day after its current agreement with ATA expires — at which point guild members would be expected to immediately fire any agent or agency that doesn’t agree to comply with the code.

In its action plan to its members, WGA says it will create a standard termination form to allow writers to leave their agencies without contacting their agent directly, which the guild will send to agencies in bulk. WGA says it will also post a list of agencies and agents who agree to comply with the proposed code of conduct.

In addition, WGA says it will launch an online database to connect writers looking for work with producers and executives who are hiring.

“We know we cannot replace agents. There will be difficult moments. But our goal is to get through staffing season and whatever period of time it takes to make a fair deal with the agencies […] Our industry will not grind to a halt. Studios and producers will still need writers. Writers on staff and working on projects will still go to work. Feature scripts will still get sold, and TV shows will still get staffed. Our ideas and our words will still have enormous value, and the work we all love to do will continue.”

Meanwhile, in its statement the ATA accused WGA of avoiding “meaningful negotiations,” and warned that the code of conduct, if passed, would force writers to pay “$49 million in commissions each year or cost all artists upwards of $110 million in additional commissions per year.”

“WGA leadership should want to engage on the two key issues of packaging and affiliate production. So far, they have not. Instead, they continue to mislead their members with false information and horror stories,” ATA said.

The statement also said that over 100 of the ATA’s member agencies have pledged to refuse compliance with the WGA”s proposed code of conduct.

The WGA responded by accusing ATA of not moving off the ultimatum it set last month that the guild must be willing to compromise on packaging fees — or “conflicted practices,” as the guild called it — as a precondition to further talks.

“Right now, seven weeks into these discussions, the agencies will not even agree to give the Guild information that would help writers get paid on time,” the guild said.  “They have stood on their principle of ‘choice,’ which is, in reality, a demand to negotiate writer-by-writer, rather than acknowledging the Guild as the representative of all writers and their proper negotiating partner.”

“We hope to make a deal before expiration, but we won’t be intimidated by another threat from the agencies. Their ‘your Guild won’t negotiate’ stance is a calculated negotiating ploy, but it will not substitute for serious conversation about the damage inflicted on writers by conflicted practices. We stand ready to talk.”

The WGA authorization vote on the Code of Conduct will open on Wednesday and continue through March 31.