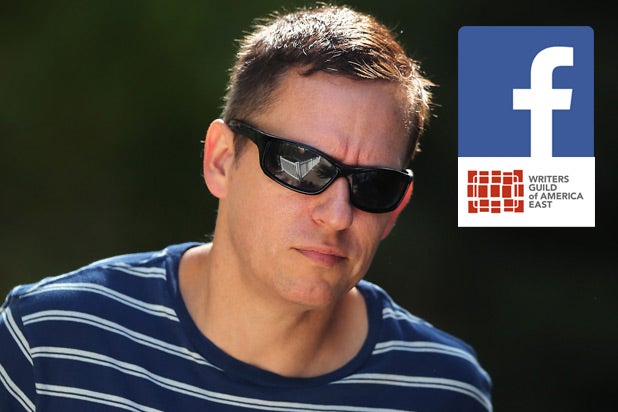 Writers Guild of America, East Executive Director Lowell Peterson doesn’t want Peter Thiel to “screw things up” for his media members, which is why the labor union has launched a petition calling on Facebook CEO Mark Zuckerberg to remove the billionaire cofounder of PayPal from his company’s board of directors.

“We know that he’s not a friend of the free press,” Peterson said of Thiel in an interview with TheWrap. “We know that he feels that the elite — or the plutocracy, if you will — should have pretty broad discretion to do whatever it wants above scrutiny by the media, above control by the public in terms of democratic structure.”

Following the revelation that Thiel has bankrolled a series of lawsuits meant to destroy Gawker Media, most notably a $140 million suit filed by wrestler Hulk Hogan, the WGAE sees the entrepreneur’s influence on Facebook as a further threat to the future of all media.

“Facebook is the portal through which so much news, particularly online news, is accessed and even sent out now,” Peterson said. “[News outlets] depend on social media like Facebook for their survival, for getting their message out, for getting their stories and videos out.”

The social network came under scrutiny from conservatives last May for its “Trending Topics” feature following a report by Gizmodo that the company was biased against right-leaning news.

Although an internal investigation found no evidence that the company was suppressing content, Facebook announced in May that it would no longer use external sites to “identify, validate or assess the importance of particular topics.”

Still, WGAE — a union which represents writers from Gawker, Huffington Post, VICE, Salon and ThinkProgress — wants to prevent Thiel from having any influence over the dissemination of content on the platform.

“It’s clear that this issue is not going away. The impact of Thiel’s funding litigation to silence journalists continues and … this is going to be something that people pay a lot of attention to,” Peterson said.

Peterson said WGAE plans on sending the petition to Facebook before its annual stockholder meeting next Monday. Though the petition has mostly been circulated amongst the guild’s digital media members, Peterson said the union would consider expanding it to WGA’s broader membership and the public at large.

“We feel very strongly that a guy who’s so anti-communication, so anti-free press shouldn’t be in a place where he can screw things up, which is what Facebook could do,” he said.

Read the petition in full here:

We are digital media writers, editors and producers represented by the Writers Guild of America, East. We are appalled that Peter Thiel would use some of his billions to fund litigation intended to put Gawker out of business.

We call upon Facebook to remove Thiel from its board of directors. A person committed to silencing journalism he doesn’t like should not sit on the board of a company that serves as the portal to digital news for tens of millions of people.