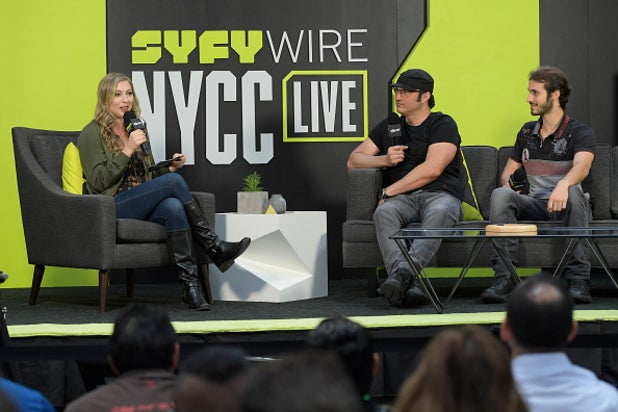 NBC Universal is partnering with Pixvana’s XR (Virtual Reality, Augmented Reality, Mixed Reality) studio, Wundervu, to produce a series of virtual reality (VR) experiences for SyfyWire.com that will allow guests to explore the floor of the New York Comic Con in 180 or 360 degrees.

Under the agreement, the production company will be creating three hosted VR episodes, each offering challenges and contests that encourage viewers — no matter where they are — to engage with the event in ways not possible until now.

“VR allows us to reach audiences in a dynamic and truly authentic way,” said Matthew Chiavelli, SVP, Digital, for SYFY. “Together with Syfy Wire’s four livestreams and with the production magic of Wundervu, we’re able to put people at New York Comic Con and other fan events that they might not have had the opportunity to experience otherwise. Helping people to share the experience of events like these in a virtual way is incredibly powerful.”

Past Wundervu VR experiences of Comic-Con have provided viewers with the opportunity to “wander” conventions – whether they attended the event live or not. The companies say that these past projects have resulted in high video completion rates and social sharing metrics, though they did not release any specific numbers.

Earlier this year, Wundervu shot and produced similar virtual reality experiences in partnership with NBC Universal for the Chicago Comic & Entertainment Expo (C2E2), the Emerald City Comic Con (ECCC) in Seattle, and the San Diego Comic-Con, which got nearly a million views.

“Virtual Reality enables passionate endemic audiences, like the SYFY WIRE fan base, to experience ‘being there’ and being part of the fun, and the networks and sponsors are starting to notice,” said Rachel Lanham, General Manager of Wundervu. “There’s no other medium that envelops the viewer and builds lasting memories quite like VR.”

The first VR segment of Comic Con NYC is expected to be available by Saturday evening on all of the SyFy Wire channels – including Facebook and YouTube.  Also, the company plans to post everything to the top 360 video channels, including YouTube360, Facebook360, and Google Daydream.