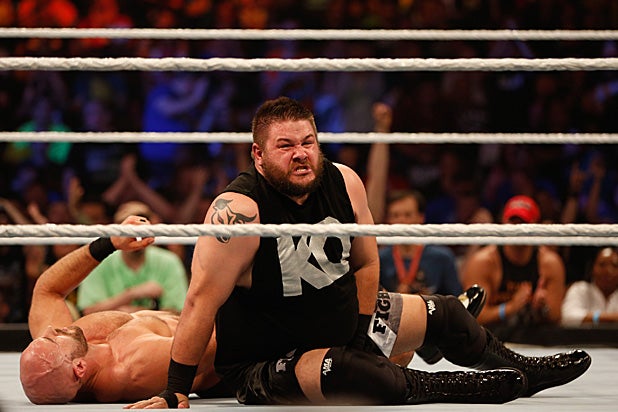 After 15 years in the wrestling ring and five trips to WrestleMania as a member of the audience, Kevin Owens finally made it to the big stage Sunday night in front of a record 101,763,000 fans at AT&T Stadium in Arlington, Texas.

“I always thought I would end up here somehow — it took a little longer than I thought but now that I am here, I feel like I belong,” Owens, whose real name is Kevin Steen, told TheWrap on Saturday.

The next day, the 31-year-old Canadian competed in the Intercontinental Championship Ladder match at WrestleMania 32, taking on The Miz, Dolph Ziggler, Sami Zayn, Stardust, Sin Cara, and the ultimate winner, Zack Ryder.

Owens never doubted that he would eventually reach the main WWE roster, but a lot of other cynics did. “I am not the typical WWE superstar,” said Owens, whose 6-foot, 266-pound frame is more like a cuddly, giant teddy bear than a ripped warrior in the Dwayne “The Rock” Johnson mold.

“The way I look and the shape I am in, I’ve had so many people tell me, ‘You’ll never make it because of the way you look,'” he said. “But that never stopped me — it may even have motivated me a little.”

The native of Quebec grew up with French as his first language and only learned to speak English as a teenager from watching “Monday Night Raw,” mimicking the promos and commentary.

He dreamed of becoming a professional wrestler after watching a VHS tape of WrestleMania XI, then worked his way up the wrestling circuit from the age of 16, before finally making it to the WWE’s developmental branch NXT in October 2014 and then the main roster last May.

Since then, he’s done countless pay-per-view specials and grappled in the ring with the likes of John Cena, Ambrose, Randy Orton, Chris Jericho and Roman Reigns. “It’s been a pretty crazy ride,” he said.

But the ride has been anything but easy. “If this [WWE] is something you are thinking of getting into because it looks like it is fun — and it is fun — be prepared to work hard, because the training is not fun,” he warned.