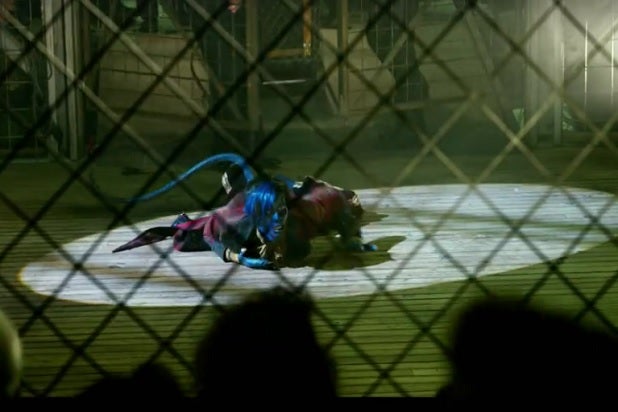 Jennifer Lawrence released a new clip from “X-Men: Apocalypse” on Facebook Thursday, and fans of the franchise should be happy to get an extended look at Nightcrawler’s cage fight against Archangel.

In the clip, Nightcrawler (Kodi Smit-McPhee) is dumped into a massive cage in front of an audience demanding blood. Angel (Ben Hardy) tries to get a hold of the blue mutant, but Nightcrawler teleports away. He cannot escape the cage, however, as it has been electrified.

The latest “X-Men” movie focuses on the heroic mutants facing off against Apocalypse (Oscar Isaac), the first and most powerful mutant, who amassed the powers of many other mutants to become immortal and invincible.

Upon awakening after thousands of years, he is disillusioned with the world as he finds it and recruits a team of powerful mutants, including a disheartened Magneto (Michael Fassbender), to cleanse mankind and create a new world order, over which he will reign.

The film reunites much of the cast from “X-Men: First Class” and “X-Men: Days of Future Past,” including James McAvoy, Lawrence, Fassbender, and Nicholas Hoult. Newcomers include Sophie Turner, Smit-McPhee, Tye Sheridan and Olivia Munn.

Bryan Singer returned to direct the project, along with writing the screenplay with Michael Dougherty, Dan Harris and Simon Kinberg. Kinberg and Singer are also producing with Lauren Shuler Donner. Stan Lee, Todd Hallowell, and Josh McLaglen are executive producing.

“X-Men: Apocalypse” hits theaters on May 27.