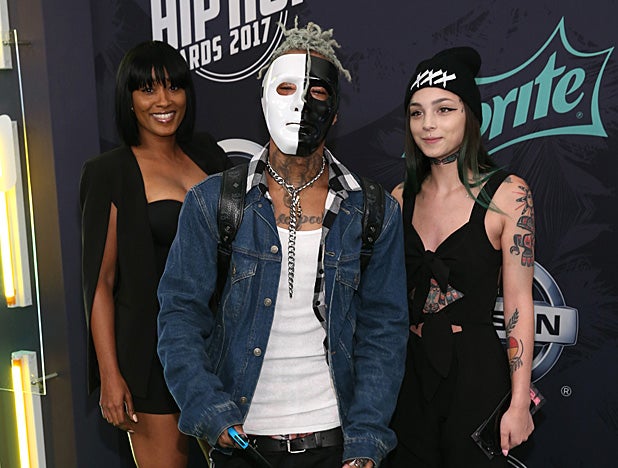 Rapper XXXTentacion was shot and killed in a drive-by shooting Monday in southern Florida. His death at age 20 was met with an outpouring of grief online from artists and collaborators such as Kanye West, J. Cole, Diplo and many more.

This sudden end to the life of XXXTentacion, whose real name was Jahseh Dwayne Onfroy, caps off an explosive career in which the Florida-based rapper quickly rose to the top of the charts, but was also at the center of internet fame, controversy, arrests and public feuds.

Here are five things you may not know about the rapper and his short-lived, yet troubled career.

1. He got his start on SoundCloud

XXXTentacion released his first track “News/Flock” onto the music streaming service SoundCloud in 2013. His subsequent releases, which had him not just rapping but also singing and experimenting in vocal styles of whispering and screaming, quickly earned him an online cult following among a genre of rap music known as “SoundCloud rap.”

It’s music that’s designed to sound raw, loud, crass and abrasive as a way of bolstering its independent authenticity, and he racked up thousands of streams collaborating with rapper Ski Mask the Slump God and others under the moniker Members Only.

XXXTentacion’s career took off when he released his breakthrough “Look at Me!” in 2016, which he eventually re-released as a single in 2017 that hit the Billboard 100 and appeared on his debut album “17.”

2. He has some unlikely influences

Part of what allowed XXXTentacion to stand out from other SoundCloud rappers of his ilk were his influences, including everything from R&B to punk, indie rock and even nu-metal. He cited artists as diverse as Nirvana, The Weeknd and The Fray as influences on his work, and he even had some unexpected collaborators, including most notably Noah Cyrus on the track “Again.”

For proof of just how far he could stretch expectations, check out this devastating cypher in which the beat cuts out entirely and he proclaims in a somber tone, “And if the world ever has an apocalypse, I will kill all of you f—ers.”

3. He’s had a lot of legal troubles

And yet listening to XXXTentacion has been a source of contention for many rap fans considering his numerous arrests and accusations of domestic assault. In 2014, he was sent to a youth detention center for a year on gun possession charges. And in 2016, he was arrested again and charged with robbery and assault with a deadly weapon. Then in October of that same year while out on bail awaiting trial, he was arrested on charges of false imprisonment, witness tampering and aggravated battery of a pregnant victim.

Spin published a thorough timeline of each of X’s legal woes and disturbing comments about women, including one exchange where he recalls slapping “a bitch” in his high school after asking his mother for advice.

4. His music was pulled from Spotify

The morality of listening to his music in turn sparked a debate when Spotify made a decision to remove his music, along with R. Kelly’s, from curated, discoverable playlists, though they were still available on demand.

“We don’t censor content because of an artist’s or creator’s behavior, but we want our editorial decisions — what we choose to program — to reflect our values,” Spotify said in a statement via the New York Times. “When an artist or creator does something that is especially harmful or hateful, it may affect the ways we work with or support that artist or creator.”

After his music started charting, the young rapper took to Twitter to engage in a long beef with Drake, with people even accusing Drake of copying XXXTentacion’s flow.

“Drake mom kinda cute, she could get it,” he tweeted back in 2017. He even released a video where he challenged Drake to a rap battle with outrageous stakes. “I’ll run around the street butt-ass naked, I’ll tattoo Drake name on my ass cheek if he can be original for two seconds or outrap me,” he said.

No matter how much you love hip-hop, this four-part documentary will tell you things you didn’t know

"Hip-Hop Evolution," which just debuted on Netflix, goes very old school to source hip-hop's early-1970s roots. If you think of A Tribe Called Quest as old-school innovators, you'll be blown away by the earlier artistry of groups like Grandmaster Flash and the Furious Five. Here are five things we learned from the series.