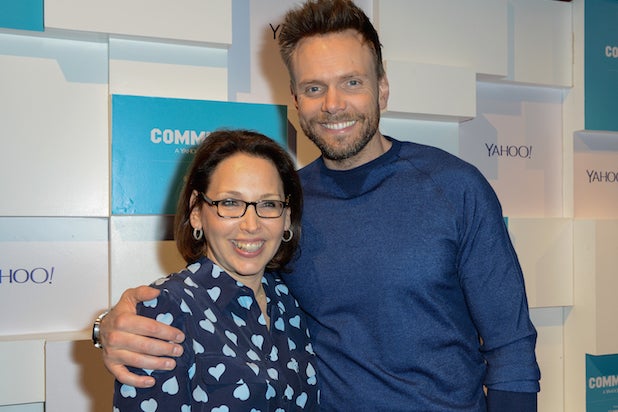 Kathy Savitt, who currently serves as Yahoo’s chief marketing officer and head of media, will join Robert Simonds’ STX Entertainment as president of digital beginning in October, it was announced Friday by Simonds and STX president Sophie Watts.

Savitt is a significant hire for the budding young studio, as she’ll be responsible for STX’s global digital content strategy, helping the studio fulfill its ambition of becoming a true creative haven for the world’s top entertainment talent.

Savitt (pictured above with “Community” star Joel McHale) will report to STX chairman/CEO Simonds, with a dotted line report to Watts.

“Kathy’s combined expertise in marketing and digital content creation is unparalleled. Her industry experience and creative vision will establish STX Digital as a new and disruptive force in the entertainment industry as we tell compelling stories to a global audience,” said Simonds. “She has keen insights into storytelling that meets digital and television viewers where they watch. Kathy will help us approach digital opportunities from an audience-first perspective, producing the best story possible.”

“What we did on the movie side — we actually think we can do exactly the same thing,” Watts told TheWrap of STX’s digital ambitions. “What Kathy has realized is that the time is right to structure this kind of content. And there’s an appetite from stars and directors to move into this space. The corollary is that the digital platforms — apple, Twitter, snapchat — they are desperate for this kind of content.”

“I’m excited and proud to join Bob, Sophie and the STX team,” said Savitt. “In a time of unprecedented change in the media industry, STX is redefining storytelling. Viewers are in control and each film or show has to earn its space in their time on its own merit. What we are doing at STX hasn’t been done before; we are creating a new way for audiences to access meaningful stories, from wherever they are.”

“The addition of Kathy to STX is another example of this team’s innovative approach to building a studio consistent with the world we live in today, and their focus on attracting the best management talent in the world to build STX Entertainment,” added Bill McGlashan, managing partner of TPG Growth.​

Savitt has spent a career at the cutting edge of digital strategy with more than 30 years of marketing, media, e-commerce, and executive leadership experience. Before joining Yahoo, Savitt was CEO of Lockerz, a company she founded in 2009 with the mission of revolutionizing the way Generation Z discovers and consumes content and products. Previously, Savitt was executive VP and chief marketing officer at American Eagle Outfitters. Prior to that, she served as VP of strategic communications, content and entertainment initiatives for Amazon.com.