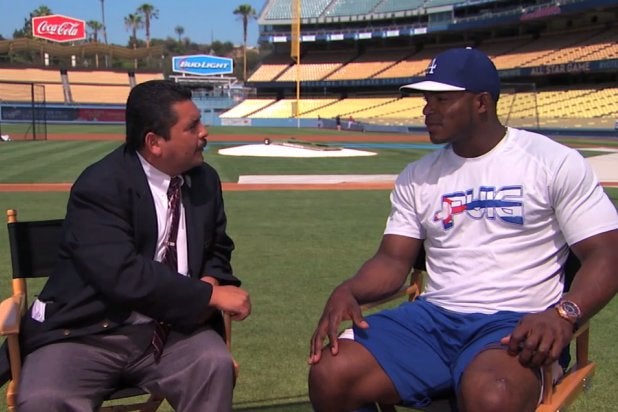 With voting for the 2014 Major League Baseball All-Star Game set to end Thursday night, Jimmy Kimmel’s security guard/sidekick Guillermo needed to fill out his ballot. But, as Kimmel explained on “Jimmy Kimmel Live,” he likes to be an informed voter, so Guillermo headed to Dodger Stadium to interview Yasiel Puig before casting his vote.

He put the 23-year-old Cuban on the spot with serious questions like, “Who’s on first?” Rather than go into the classic Abbott and Costello comedy routine, which he probably isn’t familiar with, Puig answered with the Dodgers’ first baseman, “Adrian Gonzalez.”

Guillermo also asked whether Puig was wearing a cup, and if he felt bad for pitchers after he hits home runs. “You break his heart,” Guillermo told him.

“Yes, sometimes the pitcher breaks my heart, too,” Puig responded.

In the end, Guillermo decided that Puig had his vote, and then pulled out a massive stack of ballots and convinced Puig to help him start filling them out.