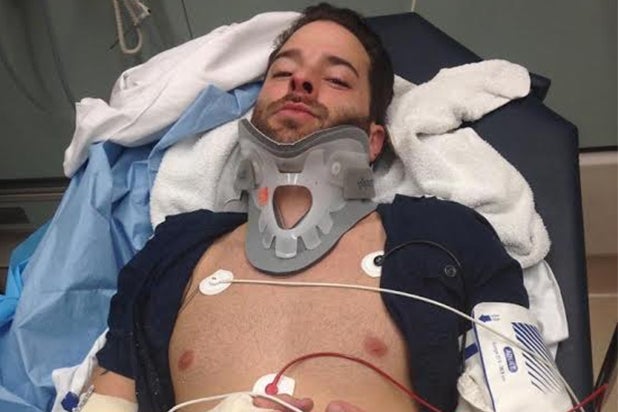 Corey Sligh in the hospital

Two men were charged Tuesday with the Thanksgiving night assault of “Young and the Restless” actor Corey Sligh, according to the Los Angeles County District Attorney’s Office. The alleged attackers were identified as Dusan Lilic, 26, and Nikola Ilic, 23.

TheWrap spoke with Sligh on Sunday, who described the brutal assault in great detail. “I thought it was over,” Sligh said as he described being slammed by a car door, then run over by the vehicle and later beaten. The incident occurred while Sligh and his girlfriend were delivering a warm Thanksgiving dinner to a friend who worked at the Rite Aid on Fairfax Avenue and Sunset Boulevard in Los Angeles.

Sligh said he noticed the two men speeding and doing donuts in the parking lot. When he asked them to slow down, they unleashed a flurry of violence.

Also read: 'Young and the Restless' Actor Recovering After Being Beaten, Hit by Car on Thanksgiving

The DA confirmed Sligh’s account, which included one man attacking him with the car door before later driving into him at a high rate of speed. After that, the two men allegedly got out of the vehicle and beat Sligh so badly that he required hospitalization.

The two men drove away, but were arrested a short time later. A witness reportedly helped police identify the suspects. Prosecutors say Lilic was the main culprit. He allegedly hit Sligh with his car door, then drove the vehicle into the actor. Meanwhile, both men are accused of getting out of the car and physically attacking Sligh, who suffered a broken arm and other injuries.

Also read: 'Young and the Restless' Actor Speaks Out on His Horrific Thanksgiving Attack: 'I Thought It Was Over'

Ilic is charged with one count of battery with serious bodily injury and assault by means likely to produce great bodily injury.

Both men were arraigned Tuesday afternoon in Los Angeles and entered not guilty pleas. They are due back in court on Dec. 22 for a preliminary hearing. If convicted, Lilic faces up to seven years in state prison, while Ilic faces four years.