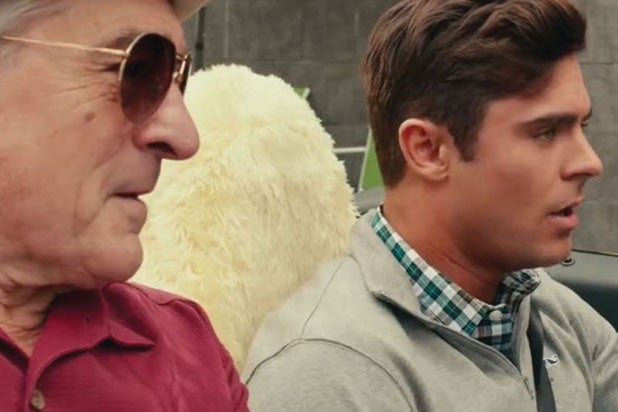 STX Entertainment’s “The Boy” is also opening this Friday, and is expected to gross around $10 million its opening weekend. It didn’t hold Thursday night previews.

“Dirty Grandpa” follows Jason’s (Efron) grandfather (De Niro) who tricks his grandson into driving him to Florida just days before his wedding.

Currently at 9 percent on Rotten Tomatoes, the comedy is expected to take in somewhere between $10 million and $12 million this weekend. That’s a considerable improvement for Efron, whose last film “We Are Your Friends” opened to only $1.7 million in August.

De Niro’s most recent comparable film was “The Intern” costarring Anne Hathaway, which grossed $17.7 million its opening weekend. He also starred in Jennifer Lawrence‘s “Joy,” which also made $17 million on opening weekend.

“The 5th Wave” is looking at an $8 million weekend due to the winter storm Jonas, which is expected to snow in moviegoers in the mid-Atlantic states and Washington D.C.

The film, which currently has a score of 21 percent on Rotten Tomatoes, costars Liev Schreiber, Maria Bello, Nick Robinson and Maika Monroe and is directed by J Blakeson.

“The 5th Wave” follows 16-year-old Cassie Sullivan (Moretz) who tries to survive in a world invaded by aliens who reverted the world back into the Stone Age.

The film’s budget was around $38 million and is based on a bestselling book series.

“The Boy” stars Lauren Cohan and follows a girl who takes a job as a nanny for an 8-year-old boy. Little does she know that he is a life-size doll, for whom the parents care for like it was human to cope with their son’s death 20 years earlier. When the nanny violates strict rules, a series of events occur which make her think the doll is actually alive.